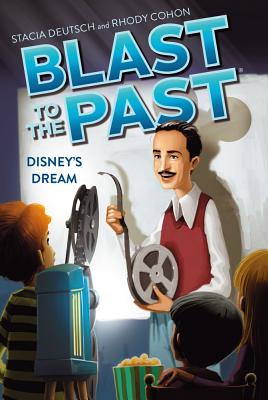 Disney's Dream (Blast to the Past #2)

The kids in Mr. Caruthers’s class don’t want a world without cartoons. Can they persuade Walt Disney to pursue his passion? Book two in an action-packed time-travel series.

“What if Walt Disney quit and never made Steamboat Willie?” That’s the question Mr. Caruthers poses to his third grade class on Monday morning. Abigail, Jacob, Zack, and Bo are excited to travel back in time and meet Walt Disney, and they’re determined to convince Mr. Disney not give up making the first animated movie with sound. After all, what would their world be like without modern cartoons? Not to mention no Mickey Mouse, no Disneyland, and no Disney Channel! But will the kids be able to help Mr. Disney follow his dream before time runs out?

David Thorn Wenzel has been part of the fantasy art movement since the 1970s when Middle Earth: The World of Tolkien Illustrated was released. He has continued to work on fantasy projects in the children’s book, trade book, and graphic novel markets throughout his career.  Illustrations from his 1980s book, Kingdom of the Dwarfs as well as the cover art of The Hobbit, are in the permanent collection of the New Britain Museum of American Art. Wenzel began his career working for Marvel and DC comics, working on The Avengers and Savage Sword of Conan. Other notable titles include the graphic novel of The Hobbit and The Wizard’s Tale. Over the course of his career, he has also illustrated numerous children’s books including Rudolph the Red-Nosed Reindeer, The Book of Kringle: Legend of the North Pole, and The King of Little Things. David lives in Connecticut where his studio overlooks a picturesque landscape of green farm fields and a winding brook. His entire family is involved in the arts. His wife Janice is an artist and teacher, and their two sons, Brendan (They All Saw A Cat, Hello Hello, A Stone Sat Still) and Christopher, are both visual artists. Greg Wenzel, David’s brother, is an author and illustrator (Giant Dinosaurs of the Jurassic).
Loading...
or
Not Currently Available for Direct Purchase