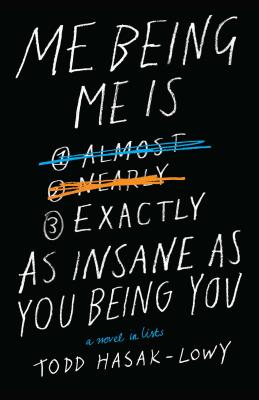 Me Being Me Is Exactly as Insane as You Being You

“In terse, engaging prose, this novel of lists traces the teen’s awkward yet heart-tuggingly true-to-life relationships with his parents, his older brother, and with the girls who are entering his life . . . great for reluctant readers due to its brief and inventive style . . . characters are authentic and appealing”
— School Library Journal

“The lists make for fast reading, and the reward is sweet for those daring enough to engage in the unconventional format. In his young adult debut, Hasak-Lowy really gets what it is to be a teen.”
— VOYA

“Powerful stream of consciousness that allows readers insight into Darren’s conflicting feelings not just about his parents but also Nate’s fall from grace and his own frustration with his attraction to bad-girl Zoey rather than the obviously delightful Rachel.”
— Booklist

Todd Hasak-Lowy has published several books for adults. 33 Minutes was his first book for young readers and he made his YA debut with Me Being Me Is Exactly as Insane as You Being You. He lives with his wife and two daughters in Evanston, Illinois.
Loading...
or support indie stores by buying on