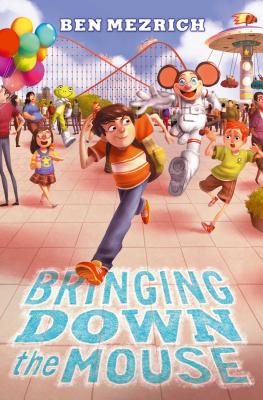 Bringing Down the Mouse (The Charlie Numbers Adventures) (Hardcover)

Charlie Lewis goes on a roller coaster ride of risk, math, and gaming in this middle grade novel that parallels the New York Times bestselling Bringing Down the House, which inspired the movie 21.

Charlie Lewis is a nerd. All he’s ever been good at is math—and he’s really good at math. So good that he’s recruited by a group of kids determined to game the system at the biggest theme park in the world—and win the grand prize. Soon Charlie is caught up in the excitement and thrill of using his math skills for awesomeness…but what’s at stake may be more than he’s willing to risk. How far will Charlie go for a chance at the ultimate reward?

Praise For Bringing Down the Mouse (The Charlie Numbers Adventures)…

"The pacing is well developed, building tension to almost a fever pitch...The plot has several unexpected and well-placed twists, and keeps readers guessing until the very end. A good fit for fans of Gordon Korman’s “Swindle” series."
— School Library Journal

"Mezrich addresses themes of loyalty and honesty while keeping the action tight and the dialogue snappy. Unexpectedly engrossing."
— Booklist

"A page-turning caper...With Bringing Down the Mouse, Mezrich has brought this theme to middle school fiction, and the result is a clever, breathtaking escapade with a likeable cast.”
— BookPage
or support indie stores by buying on
Copyright © 2020 American Booksellers Association