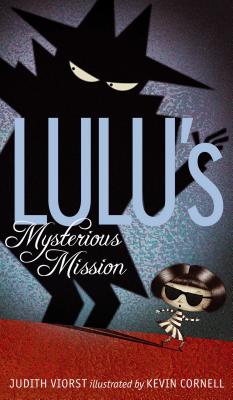 Eeny meeny miney mo,
That babysitter’s got to go.

Lulu has put her tantrum-throwing days behind her. That is, until her parents announce that they are going on vacation—WITHOUT LULU. Not only that, but they are leaving her with the formidable Ms. Sonia Sofia Solinsky, who says hello by bellowing, “The Eagle has landed,” and smiles at you with the kind of smile that an alligator might give you before eating you for dinner.

The second her parents are out of the house, Lulu tries out several elaborate schemes to bring them straight back. But just when she seems to finally be making some headway, her babysitter reveals an astonishing secret…one that has Lulu crossing her fingers that her parents will go on vacation all the time—without her!

"Another wild adventure featuring the exasperating and inexplicably lovable Lulu.... Throughout the text, Viorst weaves in an authorial voice that speaks directly to readers, offering witty metafictional commentary sure to induce giggles. Black-and-white drawings depicting a spirited Lulu in action and a good deal of white space keep the text from becoming overwhelming to readers new to chapter books.
Great fun for Lulu fans old and new."
— Kirkus Reviews, February 2014

"Farce, slapstick, tall tale; punctuated with authorial asides, leavened with scads of white space and the many energetic sweeps of Cornell's comic illustrations...this is a book to tickle younger listeners as well as emerging readers."
— Horn Book Magazine, March/April 2013

"Spoiled little Lulu is back in a third book to tackle a new challenge: a babysitter. . . . Lulu’s fans will be happy to read her next (mis)adventure."
— School Library Journal, March 2014

"Lulu is the type of heroine who is the exact opposite of charming. She is exasperating, tiring, and thinks she is oh-so-clever. This third Lulu book has the heroine meeting her match in a babysitter who is anything but ordinary. . . . Viorst has always exercised a light, droll touch, and this latest will suit fans of her other humorous early chapter books. Cornell’s illustrations stretch and squish the characters to suit their high-strung antics, while also emphasizing the tall-tale flavor of the adventure—surely Lulu is a match for those legendary heroes if she can successfully transform into a cow (which she can!)."
— Booklist, April 2014

Kevin Cornell’s secret spy headquarters are located in Philadelphia. He has successfully accomplished several thrilling missions, including illustrating Mustache! and Count The Monkeys by Mac Barnett, the Chicken Squad series by Doreen Cronin, and the Lulu series by Judith Viorst. Leave a coded message for him at KevSkinRug.com.
Loading...
or support indie stores by buying on