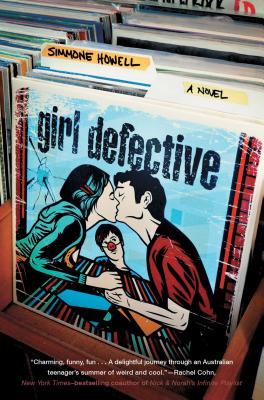 In the tradition of High Fidelity and Empire Records, this is the literary soundtrack to Skylark Martin’s strange, mysterious, and extraordinary summer.

This is the story of a wild girl and a ghost girl; a boy who knew nothing and a boy who thought he knew everything.

It’s a story about Skylark Martin, who lives with her father and brother in a vintage record shop and is trying to find her place in the world. It’s about ten-year-old Super Agent Gully and his case of a lifetime. And about beautiful, reckless, sharp-as-knives Nancy. It’s about tragi-hot Luke, and just-plain-tragic Mia Casey. It’s about the dark underbelly of a curious neighborhood. It’s about summer, and weirdness, and mystery, and music.

And it’s about life and death and grief and romance. All the good stuff.

* "Funny, observant, a relentless critic of the world's (and her own) flaws, Sky is original, thoroughly authentic and great company, decorating her astute, irreverent commentary with vivid Aussie references; chasing these down should provide foreign readers with hours of online fun."
— Kirkus Reviews, May 2014, *STARRED REVIEW*

"Melancholy and haunting, funny and hopeful, and just everything I love in a book."
— Trish Doller, author of Where the Stars Still Shine

"Like a cross between High Fidelity and The Killing, Australian novelist Howell’s (Everything Beautiful) story alternates between cheeky and dark."
— Publishers Weekly, August 2014

"Part mystery, part romance, and part unconventional family story, the book introduces an intriguing cast of characters, each of whom has his or her own mystery or problem to solve.... Sky’s first-person narrative...is observant, questioning, and self-critical...the novel’s rich and well-described setting anchors the plot while its conclusion works to illuminate the relationship between its unique characters and their preoccupations."
— Horn Book Magazine, September/October 2014

"This is a story of characters. There are no good guys or bad guys, just a lot of complex people, quirky, flawed and layered.... The dialogue is snappy and sometimes brutally honest."
— VOYA Magazine, October 2014

* "Part coming-of-age tale, part family story, and part mystery, this novel provides the reader with a well-crafted, layered narrative.... The writing style’s cadence and phrasing perfectly suit both the character and the story.... Likely to suit fans of Marchetta’s Jellicoe Road (BCCB 11/08), this novel will also please readers who like their narrators as active as they are introspective."
— The Bulletin of the Center for Children's Books, November 2014, *STARRED REVIEW

* "Australian author Howell brings stateside her intriguing story of a coming-of-age summer for 15-year-old Skylark Martin.... Howell’s writing is engaging and well suited to the pacing of the story, and the Aussie references are part of the charm."
— School Library Journal, November 2014, *STARRED REVIEW*

Simmone Howell is the award-winning author of Notes from the Teenage Underground and Everything Beautiful. Before becoming a writer she worked in a multitude of secondhand bookstores and record shops, and as a result her house looks like one. She lives with her husband and son and crazy dog in Melbourne, Australia. Visit her at SimmoneHowell.com.
Loading...
or
Not Currently Available for Direct Purchase