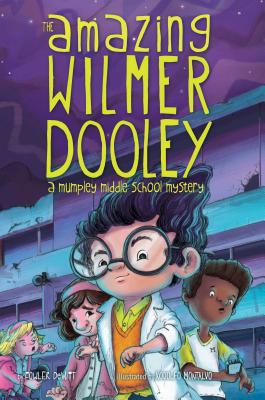 Student scientist Wilmer Dooley and his friends—and enemies—are back with another hilarious mystery to solve in this zany, action-packed sequel to The Contagious Colors of Mumpley Middle School.

Wilmer Dooley can’t wait to be a seventh grader. But first, he really can’t wait for the 45th Annual State Science Fair and Consortium. It will be a blissful summer weekend spent hanging out with Ernie and impressing Roxie with his dazzling project on bacteria.

But Wilmer’s dreams come crashing down when he arrives at the dilapidated Sac à Puces Palladium, Lodge, and Resort-Like Hotel. First, his old biology teacher, Mrs. Padgett, is a chaperone—and she absolutely despises Wilmer. Next he learns that the fair’s final activity involves being stranded in the dark woods and trying not to get eaten by bears. And worst of all, his arch nemesis, Claudius, is there—and he’s brought along his equally rotten cousin Vlad.

Wilmer quickly begins to suspect that the two are planning something horribly sinister. But as he grows more and more concerned, the other kids begin behaving more and more strangely...almost as if they’re being brainwashed. And when Wilmer discovers the diabolical scheme that’s afoot, it’s even more terrible than he had imagined—and he may be too late to stop it.

Rodolfo Montalvo started drawing so early in life that he doesn’t even remember when he first started doing it. No matter where he was or what he did growing up, drawing was always a part of him. Today, he feels very fortunate to be able to work as an illustrator and hopes to keep drawing and writing into old age alongside his wife, René, who is also an artist. Montalvo lives in Long Beach, California, and you can visit him online at RodolfoMontalvo.com.
Loading...
or
Not Currently Available for Direct Purchase