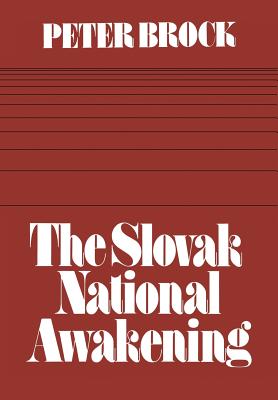 An Essay in the Intellectual History of East Central Europe (Heritage)

The Slovaks lived under Hungarian rule for centuries, with no clear sense of political separateness, preserving Slovak as their spoken language, but using Czech as their written language. In the last decades of the 18th and the first half of the 19th centuries, the efforts made by clerical intellectuals to develop a language more closely attuned to Slovak needs led to the rise of Slovak nationalism.

The Slovak National Awakening describes the three major stages in the development of national consciousness. In the 1780s Catholic intellectuals began to write in the vernacular; a Catholic priest, Bernol k, produced a Slovak grammar and dictionary and an influential treatise in defence of Slovak as a language separate from Czech. However, while Slovak ethnic distinctness was being asserted, the sense of belonging to the Hungarian nation was not questioned. The next steps were taken by the Protestant intelligentsia, who had been pro-Czech since the Reformation. Influenced by German concepts of linguistic nationalism, they began to assert Slovak cultural and linguistic separateness, but still within the political framework of the Hungarian State.

The third stage in the Slovak Awakening came in the mid-1840s when a group of young Protestant intellectuals, led by L'udov t St r, rejected their predecessors' 'Czechoslovakism' and advocated a Slovak language and a Slovak nationality. In 1851, the Catholic Bernol kites and the Protestant St rites were able to agree on the language that became the basis of modern Slovak.

This study of the relation between language and nationalism will appeal to specialists in European history and will be of interest for the light it throws on modern separatists and anti-imperialist movements.