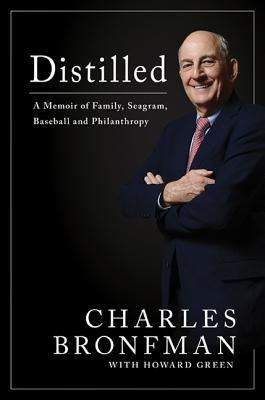 Distilled A Memoir of Family, Seagram, Baseball, and Philanthropy

While much has been written about his father, Sam, a titan of industry, there is no public record of Charles Bronfman’s thoughts on his own life, family, career and his significant accomplishments in sport and philanthropy.

Distilled does just that, chronicling key events in the life of the heir to one of Canada’s great fortunes. Born in 1931 to the fabulously wealthy Bronfmans, Charles grew up in a 20-room mansion with many staff. Via their control of the distilling giant Seagram, the Bronfman family dominated the liquor business with brands such as Crown Royal, V.O. and Chivas Regal. By the 1980s, Seagram was also the biggest shareholder of DuPont and by the 1990s, the family’s wealth was in the billions, culminating in the $35-billion sale of Seagram to France’s Vivendi, which turned into a financial and family disaster. In Distilled, Charles reflects on all of it--his relationship with his parents, his brother Edgar, working in the family business, landing Canada’s first big league baseball franchise (the Montreal Expos), leading a philanthropic life by promoting Canadian identity through Heritage Minutes and supporting Israel through countless innovative initiatives including the globally respected Birthright Israel--and to how the Bronfman family splintered over the sale of Seagram.

CHARLES BRONFMAN is the former co-chairman of Seagram. As chairman and majority owner of the Montreal Expos, he brought Major League Baseball to Canada. Until 2016, he chaired the Andrea and Charles Bronfman Philanthropies, which oversaw groundbreaking work in Canada, Israel and the United States. Among his signature philanthropic achievements are Heritage Minutes and Birthright Israel. He divides his time between Montreal, New York and Florida.

HOWARD GREEN is an author and broadcaster. A founding anchor at Business News Network, he spent fifteen years at BNN, where he hosted Headline, the network’s flagship interview program. Green is also the author of the bestseller Banking on America and is an award-winning documentary filmmaker.

HOWARD GREEN is an author and broadcaster. A founding anchor at Business News Network, he spent fifteen years at BNN, where he hosted Headline, the network’s flagship interview program. Green is also the author of the bestseller Banking on America and is an award-winning documentary filmmaker.


Praise For Distilled: Distilled A Memoir of Family, Seagram, Baseball, and Philanthropy…

“A magical and magnetic story of how one extraordinary man optimistically and tenaciously navigated his values and vision triumphantly through business, philanthropy, education, and the public interest without ever losing his sense of compassion--or balance. A true original. And a great read!”
— The Honourable Rosalie Silberman Abella, Supreme Court of Canada

“I have known Charles Bronfman for fifty years. During that period he has shown great strengths as a visionary business leader, an innovative philanthropist and as a passionate Canadian who made a major contribution to the unity and prosperity of our country . . . a fascinating book.”
— The Right Honourable Brian Mulroney, former prime minister of Canada

“Charles Bronfman is a rare combination of generosity and determination. A lover of Zion and a beloved leader of his people. Above all, he is a real friend--in wintry days, and in the blossoming spring.”
— Shimon Peres, former president and prime minister of Israel and recipient of the Nobel Peace Prize

“Charles Bronfman was a great statesman and leader with remarkable vision during his tenure as a Major League Baseball owner. . . . He brought not only wisdom but integrity to our sport . . . Distilled is compelling and absolutely fascinating to read.”
— Allan H. (Bud) Selig, Commissioner Emeritus, Major League Baseball

“Charles Bronfman is a passionate advocate of Canada and the Canadian identity . . . . He has defined what it truly means to be a philanthropist in Canada. His story serves as inspiration to us all.”
— Suzanne Fortier, Principal and Vice-Chancellor, McGill University
or
Not Currently Available for Direct Purchase
Copyright © 2020 American Booksellers Association