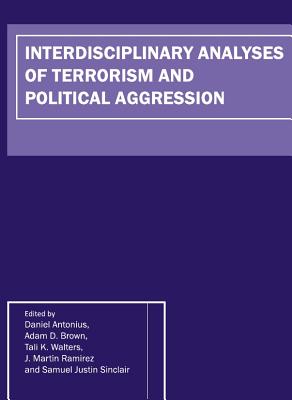 Over the past decade, academics spanning the professional spectrum have begun to unpack the complexity of factors that underlie terrorism and political violence with increased vigor. The resulting field has begun to yield valuable empirical and theoretical insights into these dynamics, which are now shaping both immediate frameworks for responding to terrorism as well as the broader policy implications for managing this problem in the near and far-term. Interdisciplinary Analyses of Terrorism and Political Aggression seeks to advance the understanding of terrorism and political violence by disseminating research representing a wide array of professional disciplines from scholars across the globe. This volume aims to encourage academic discourse and debate, and provide a more complex understanding of the myriad of factors that contribute to terrorism as well as the way in which groups respond to terrorism. Interdisciplinary Analyses of Terrorism and Political Aggression brings together prominent scholars from the US, the UK, Iran, Australia, Canada, Scotland, Poland, Bulgaria, Italy and Spain, representing a variety of academic disciplines including criminology, psychology, psychiatry, police science, physics, sociology, biology and international relations. The authors approach the topic of terrorism from various perspectives, and provide the reader with a more nuanced view on issues of terrorism and political violence.