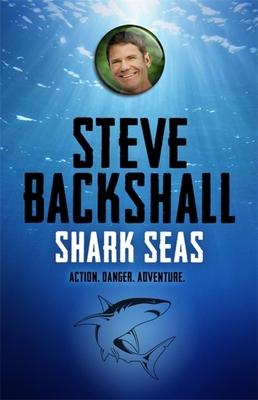 Saker and Sinter continue their quest to save the world's endangered animals in the fourth thrilling adventure in TV presenter Steve Backshall's Falcon Chronicles, this time swimming in shark seas. . .

Perfect for fans of Anthony Horowitz, Charlie Higson and Bear Grylls. This is the fourth adventure in the Falcon Chronicles, filled with intrigue, danger, exotic wildlife and dramatic locations.

Steve Backshall is well-known as a TV presenter, wildlife enthusiast and explorer. He travels the world to learn about the most inspiring animals, from boxing mantis shrimp to charging tigers. Steve also regularly writes articles for newspapers and magazines including the NATIONAL GEOGRAPHIC TRAVELER and BBC WILDLIFE and is an inspirational public speaker.

Tiger Wars is an excellent debut. Backshall's pacy narrative carries us with him, educating along the way, and his characters fascinate. This won't be the last we hear from Sinter and Saker.—We Love This Book

Zoologist, presenter, adventurer and now novelist, Steve Backshall is quite a talent... Backshall fills the novel with information about the natural world and the ways humans are conspiring to damage it - unless Sinter and Saker can stop them. But with a packed narrative and pacey language, this series will be welcomed by his growing audience. Indeed though, I received two review copies, I have only one left - my nine year old son won't give the other back.—Tom Jackson, BBC WILDLIFE

The story is full of action, and it made me want to read the other novels in the series—Annabel Moat, aged 9, National Geographic Kids

Steve Backshall's first foray into fiction tells the story of Saker and Sinter. On the run, they find themselves turned into an unlikely pair of eco warriors. Fast paced with a serious message.—ANGELS AND URCHINS

Exciting to read and vividly brought to life in the dramatic backgrounds of India and China, this is also an important story about protecting wild life.—Julia Eccleshare, LOVEREADING4KIDS

Backshall has dreamed up a gripping action thriller in the heat of India. The wicked Wolf who's in charge of the plot to nab Saker, makes for an excellent villain and Backshall isn't afraid to show his vulnerabilities either. Of course there's an animal theme here and the message that poaching and making money from beautiful creatures is a bad thing is heartfelt but doesn't get in the way of a gripping adventure.—FLIPSIDE
or
Not Currently Available for Direct Purchase
Copyright © 2020 American Booksellers Association