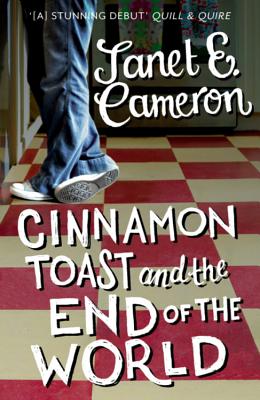 Cinnamon Toast and the End of the World (Paperback)

Stephen Shulevitz remembers the end of the world. Two o'clock in the morning on a Saturday night, in Riverside, Nova Scotia when he realises he has fallen in love - with exactly the wrong person.

There are no volcanic eruptions. No floods or fires. Just Stephen, watching TV with his best friend, realising that life, as he knows it, will never be the same.

The smart move would be to run away - from Riverside, his overbearing hippie mother, his distant pot-smoking father - and especially his feelings. But then Stephen begins to wonder: what would happen if he had the courage to face the end of the world head on?

Born in Nova Scotia, Janet moved to Ireland in 2005 after she met her husband, an Irish journalist, while travelling in Japan. She has completed a Master of Philosophy in Creative Writing at Trinity College Dublin. She has been short-listed for the Fish Short Story Prize (2008) and the Fish Short Memoir Prize (2012) and has published an adaptation of A Midsummer Night's Dream for younger ESL learners (2010, Black Cat Publishing, Genoa). She now teaches part-time at Dublin Business School. Cinnamon Toast and the End of the World is her first novel.

Praise For Cinnamon Toast and the End of the World…