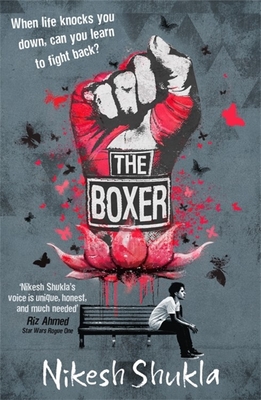 Told over the course of the ten rounds of his first fight, this is the story of amateur boxer Sunny. A seventeen year old feeling isolated and disconnected in the city he's just moved to, Sunny joins a boxing club to learn to protect himself after a racist attack. He finds the community he's been desperately seeking at the club, and a mentor in trainer Shobu, who helps him find his place in the world. But racial tensions are rising in the city, and when a Far Right march through Bristol turns violent, Sunny is faced with losing his new best friend Keir to radicalisation.

A gripping, life-affirming YA novel about friendship, radicalisation and finding where you belong.


Praise For The Boxer…

A story of fear, hope, and identity in Bristol—The Observer

A gritty, thought-provoking read that could be just the thing to get a reluctant adolescent to pick up a book during the school holidays—RED

This is a brilliant, very contemporary story of fear, hope, racism, strength, boxing and learning to be yourself. Nikesh Shukla writes with tough fist and a tender heart. The kind of book that will keep any young adult reading.—Matt Haig

Nikesh Shukla's voice is unique, honest and much needed.—Riz Ahmed

The Boxer is a penetrating look at the dangers of the rise in racism in post-Brexit Britain, where right-wing extremists feel validated in their fear and dislike of anyone they see as different to themselves...Shukla has an enviable ability to get under the skins of his characters, showing life through Sunny's eyes in a way that doesn't pull any punches...The Boxer is a book that may well challenge your perceptions about the sport, if - like me - it's something you've never favoured. But seeing the world, and boxing, through Sunny's eyes did make me rethink the appeal of the sport, particularly for youngsters such as Sunny. And if it's able to help teenagers and young men like him to be more comfortable and confident in their own skins, and help them to cope better with the unhealthy tide of racist abuse that seems to be sweeping through this country, then I'm happy to have my own prejudice against the sport challenged.

Shukla examines the other face of radicalisation, showing how easy it is for young white men to be sucked in by far-right extremists and this makes a refreshing change from books that focus on radicalisation within Islam. The Boxer builds on Shukla's success with his excellent debut Run, Riot.

Nikesh Shukla is the editor of British Book Award-shortlisted anthology The Good Immigrant, a collection of essays by British writers of colour about race and immigration in the UK. His debut novel, Coconut Unlimited, was shortlisted for the Costa First Novel Award and his debut YA novel, Run, Riot, was shortlisted for the Specsavers National Book Award. Nikesh has written for The Guardian, Observer, Independent, Esquire, Buzzfeed, Vice and BBC2 and BBC Radio 4. Nikesh was one of Foreign Policy magazine's 100 Global Thinkers and The Bookseller's 100 most influential people in publishing in 2016 and in 2017. He is the co-founder of the literary journal, The Good Journal and The Good Literary Agency.