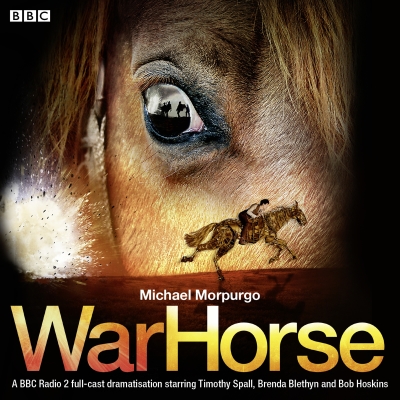 This production--adapted by John Tams and Sally Ward at the behest of the author--is a moving tale of a boy's extraordinary bond with his horse during World War I. The story of a farm horse sold from Devon into the mire, wire, and machine guns of World War I of 1914-1918 brings together a stellar cast, including Timothy Spall, Brenda Blethyn, and Bob Hoskins, with music and songs from some of the UK's finest folk musicians. This drama was directed by John Tams, who was nominated for an Olivier Award for his work on the phenomenally successful War Horse stage epic at the National Theatre ("the theatrical event of the decade" --Times) and which also inspired the Steven Spielberg film.
1 CD. 59 mins.

Michael Morpurgo has written more than 120 books, many of them award-winning. His most well-known work, War Horse, was adapted into a multi-Oscar nominated film by Steven Spielberg, and a widely-acclaimed play at the National Theatre. In 2003 Michael became the third Children's Laureate, a position he helped create with the poet Ted Hughes. With his wife, Clare, he set up the charity Farms for City Children, and for their pioneering work they were both awarded the MBE in 1999.
Loading...
or
Not Currently Available for Direct Purchase