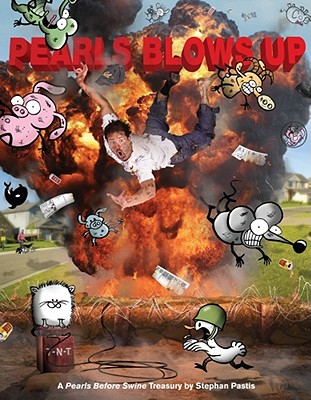 A Pearls Before Swine Treasury

Smart, sharp, and sometimes cynical, Pearls Before Swine is the fastest growing cartoon property in the universe.

Offering blistering commentary on hot-button topics related to recent news events, popular culture, cartoon-page contemporaries, and more, Pearls Before Swine expertly illustrates the flaws and shortcomings of human nature through Pastis's mindful menagerie of fiery and feisty characters. Arrogant, self-centered, and totally hilarious Rat stars in misadventure after misadventure with his four-legged friends, Pig, the slow but good-hearted conscience of the strip; Goat, the voice of reason that often goes unheard; Zebra, the activist; and those eternally inept carnivorous Crocs.

Catch the dynamite action inside this hot-off-the-press edition of Pearls Blows Up. With multiple honors as Best Comic Strip of the Year by the National Cartoonists Society, and an international fan base that follows the strip's appearance in more than 600 newspapers worldwide, Pearls Blows Up is guaranteed to be a blast.

Stephan Pastis is an attorney turned cartoonist. A graduate of the University of California, Berkeley, and the UCLA School of Law, he worked as a lawyer before trying his hand at cartooning. Pastis lives in the Bay Area with his wife and two children.
Loading...
or
Not Currently Available for Direct Purchase