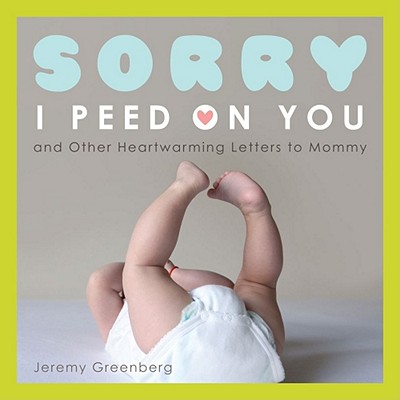 Sorry I Peed on You (and Other Heartwarming Letters to Mommy)

If you love the hilarious E*TRADE baby commercials, then this hilarious collection of mock letters to mommy written from the perspective of more than 50 precocious toddlers is the book for you!

Wouldn't you love to know what your toddler's thinking when he refuses to stop jumping on the couch? Jeremy Greenberg's hilarious and thoughtful letters give parents a glimpse into the minds of their little ones. Finally, we can hear "first person" how a kid really isn't fooled by broccoli buried in cheese, how he'd really appreciate it if he could start going down the slide by himself, or how he'd like to apologize for peeing on you during the two seconds it took for you to reach for a fresh diaper.

From Daddy's latest four-letter vocab lessons to the dog's (not the toddler's) repeated milk dribbles on the carpet, this hilarious book answers a question every mother of a toddler wants to know: What in the world are they thinking?!

Jeremy Greenberg is the best-selling author of 9 humor books, an award-winning parenting blogger, as well as an internationally headlining stand-up comedian and joke writer. When not traveling, Jeremy is at home in San Diego demonstrating alpha-male behavior to his twin, eight-year-old sons--mostly by saying "Whatever" and leaving the room every time his wife says that he's incorrectly loaded the dishwasher. www.jeremygreenberg.com
Loading...
or
Not Currently Available for Direct Purchase