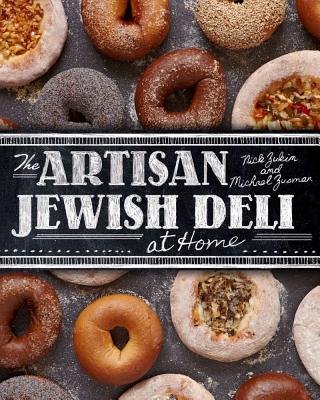 The Artisan Jewish Deli at Home

For Jewish deli devotees and DIY food fanatics alike, The Artisan Jewish Deli at Home is a must-have collection of over 100 recipes for creating timeless deli classics, modern twists on old ideas and innovations to shock your Old Country elders. Photographs, historical tidbits, reminiscences, and reference material round out the book, adding lively cultural context.

Finally, fifty years after I started eating pastrami sandwiches and knishes at Wilshire’s Deli in Cedarhurst, Long Island, Nick Zukin and Michael C. Zusman have written a cookbook that allows delicatessen enthusiasts to make their favorite deli dishes at home. Making your own knishes? No problem. Rustle up your own pickles? Bring it on. Michael and Nick manage to make deli food simultaneously contemporary and timeless, which is no easy feat. If reading The Artisan Jewish Deli at Home doesn’t make you hungry, you’ve never rhapsodized over a pastrami sandwich or driven a hundred miles for a transcendent plate of latkes. If my grandmother, the greatest Jewish deli–style cook I’ve ever known, were alive she’d be kvelling over this book.”
—Ed Levine, founder of Seriouseats.com

“Michael and Nick’s handsome book brings some of your favorite deli recipes and memories into your home kitchen. Their pickles, knishes, and pastrami are just like you remember, only better!”
—Joan Nathan, author of Jewish Cooking in America

“Before you open this book, be sure to crack a window, because your house will soon reek of the glorious funk of delicatessen. The mouthwatering scent of baking bagels, bubbling soups, and steaming pickled meats will conquer every square inch of available air, bathing it all in a rich, delicious patina of schmaltz. Don’t be surprised if a sarcastic waiter named Abe appears in your kitchen. The Artisan Jewish Deli at Home will turn any house into a delicatessen worth its weight in knishes.”
—David Sax, author of Save the Deli

If you don’t happen to live near one of the new wave of artisan-style Jewish delis that have sprung up around North America over the last few years, not to worry. With this book, the world of Jewish deli, in all its unsubtle splendor—can be yours in the comfort (and privacy) of your own kitchen. And it’s not that hard. Really. On top of all the Jewish deli classics, The Artisan Jewish Deli at Home offers updates and new angles on the oldways that are bound to thrill the palates of a modern generation of eaters focused on quality ingredients and a lighter-handed approach to a traditionally heavy cuisine.

Added cultural context comes from quick-hitting interviews with Joan Nathan and other Jewish food luminaries; histories of a few deli stalwarts such as bagels and pastrami; and first-hand reports from within the walls of the authors’ favorite temples of modern Jewish gastronomy located across the country including: Mile End Delicatessen in New York City; Wise Sons Delicatessen in San Francisco; Kenny & Zuke's Delicatessen in Portland, OR; Stopsky's Delicatessan in Mercer Island, Washington; and Caplansky's Delicatessen in Toronto.

Praise For The Artisan Jewish Deli at Home…

Michael C. Zusman: Michael is a state court judge by day and a freelance restaurant and food writer at night, working for several local publications in his Portland, Oregon, hometown. Michael is also a serious amateur baker and supplied the bread recipes used by Kenny & Zuke’s Delicatessen. When he’s not spending time with his teenage daughter, keeping tabs on Portland’s vibrant and ever-evolving restaurant scene, or playing with a batch of dough, Michael is a travel fanatic, chalking up miles to any destination with a strong culinary tradition. Singapore, Sydney, and New York City are top-notch, though his favorite restaurant anywhere is Chicago’s Alinea.

Nick Zukin: Nick is the “Zuke” in Kenny & Zuke’s. A prominent Portland food blogger, he approached Ken “Kenny” Gordon in 2005 with a recipe for killer pastrami and the dream of connecting with his heritage.The proposition: open a Jewish deli specializing in house-made pastrami and hand-rolled bagels. After testing the waters selling at the farmers' market and at pop-up brunches, Nick helped open the first of a new wave of Jewish delicatessens focused on producing artisanal eats. Ever versatile, Nick recently debuted a solo venture, Mi Mero Mole, a Mexican restaurant specializing in the street food of Mexico City.