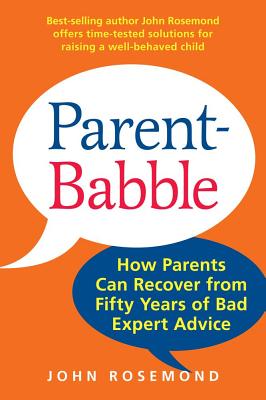 If you were to stack all the current parenting books on top of one another, the resulting pile would be nearly four times the height of the Freedom Tower. Parenting expert John Rosemond has dubbed this imaginary narrative construction the "Tower of Parent-Babble," and, as was the case with the Tower of Babel, the building blocks of its construction have led to mass confusion with frustrated, anxious, clueless, and stressed-out parents raising spoiled, egocentric, unfocused, and unhappy children.

In Parent-Babble, Rosemond asserts that America has been in the throes of an ever-deepening child-rearing crisis since the 1970s, and he explains how parents have moved away from the child-rearing basics of the 1950s and 1960s to focus on raising children with "high self-esteem."

But what could be wrong with high self-esteem? Plenty, according to Rosemond. High self-esteem is associated with anti-social behavior and little regard for others. In addition, children reared on postmodern psychological parenting theories are 10 times more likely to experience a serious emotional setback by the age of 16 compared with children who grew up in the 50s and 60s. In Parent-Babble, Rosemond deconstructs the faulty theories, points out the "experts" who have led parents astray, and calls for a return to values, a return to civility, and a return to raising healthy, happy, and productive adults.

John Rosemond is a family psychologist who has directed mental-health programs and been in full-time private practice working with families and children. Since 1990, he has devoted his time to speaking and writing. Rosemond's weekly syndicated parenting column now appears in some 250 newspapers, and he has written 15 best-selling books on parenting and the family. He is one of the busiest and most popular speakers in the field, giving more than 200 talks a year to parent and professional groups nationwide. He and his wife of 39 years, Willie, have two grown children and six well-behaved grandchildren.
Loading...
or
Not Currently Available for Direct Purchase