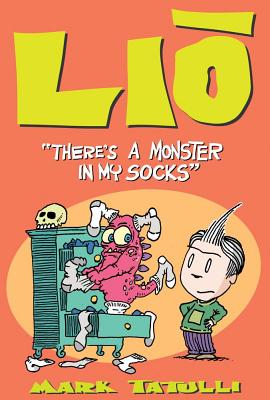 There's a Monster in My Socks

For the first time, the creepy, crawly, awesome world of Lio in a kid-targeted book.

The world of Lio is filled with the extraordinary—monsters under the bed, wild reptile pets, robot inventions, weird science—but it’s all commonplace for this most uncommon young man. Mark Tatulli renders this pantomime strip in pen-and-ink style, giving the artwork a dark, spidery feel to match the strip’s dark humor. Lio explores the twisted realm of a kid’s imagination—at once bizarre, creepy, and fun. Now, in this collection edited specially for kids, Lio is available to his most dedicated fans.

Mark Tatulli, who was first known for his Heart of the City comic strip, took on Lio as an outlet for his dark and twisted humor. In addition to his cartooning experience, Tatulli is also an accomplished filmmaker and animator, and is the recipient of three Emmy awards for his television work. Mark currently resides in New Jersey with his wife, son, and two daughters. His children are the true joy of his life and the inspiration for much of his comic artwork.

gocomics.com/lio
or support indie stores by buying on
(This book is on backorder)
Copyright © 2020 American Booksellers Association