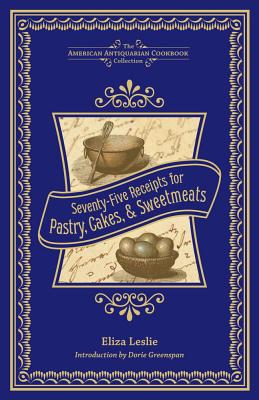 First published in Boston in 1828, this volume in the American Antiquarian Cookbook Collection was America’s first baking cookbook and the first to organize recipes by listing ingredients at the beginning of each recipe separate from the directions, as opposed to being lumped together in a narrative paragraph.

Eliza Leslie’s Seventy-five Receipts for Pastry, Cakes, and Sweetmeats was the first distinctively baking cookbook published in America, as well as the first to share ingredients in a systematic list order at the beginning of each recipe. As Eliza recorded at the time of initial publication, “All the ingredients, with their proper quantities, are enumerated in a list at the head of each receipt, a plan which will greatly facilitate the business of procuring and preparing the requisite article.”


Seventy-five Receipts  was Leslie’s first cookbook, and it was her most popular and influential cookery title. Featuring recipes ranging from Preserved Pine-Apple to Gooseberry Jelly, Curds and Whey, and Butter Biscuits, Eliza stressed that the recipes within the collection are “in every sense of the word, American,” as opposed to the many British and French cookbooks being produced at the time. She adds that if exactly followed, the articles produced from Seventy-five Receipts’ recipes, “will not be found inferior to any of a similar description made in the European manner.”

This facsimile edition of Eliza Leslie’s Seventy-five Receipts for Pastry, Cakes, and Sweetmeats was reproduced by permission from the volume in the collection of the American Antiquarian Society, Worcester, Massachusetts. Founded in 1812 by Isaiah Thomas, a Revolutionary War patriot and successful printer and publisher, the Society is a research library documenting the life of Americans from the colonial era through 1876. The Society collects, preserves, and makes available as complete a record as possible of the printed materials from the early American experience. The cookbook collection includes approximately 1,100 volumes.

Known familiarly as "Miss Leslie", Eliza Leslie was the daughter of a Philadelphia watchmaker who was a personal friend of Benjamin Franklin and Thomas Jefferson. A resident of Philadelphia, her first cookbook was published in her fortieth year, and was followed by almost a dozen more, books that were reprinted over and over and made her the most popular, well-known cookbook writer of the 19th century. She also wrote books on etiquette and children's books, and for a time she edited an annual gift book The Gift, which included selections from successful writers of the day including Henry Wadworth Longfellow.
Loading...
or
Not Currently Available for Direct Purchase