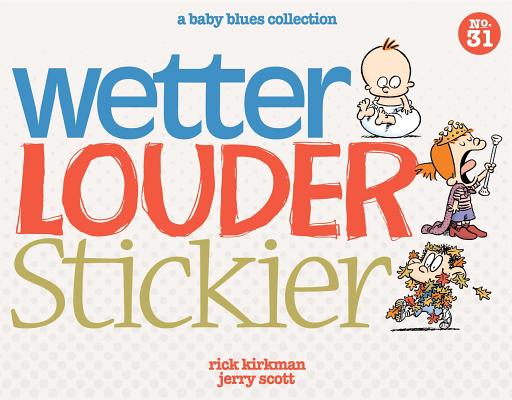 Join in the chaotic fun with the MacPherson family in this thirty-first Baby Blues cartoon collection!

Child-rearing reaches an entirely new level of delightfully messy chaos in Baby Blues: Wetter, Louder, Stickier. Battle-ready and perpetually exhausted, Daryl and Wanda team up to navigate a new front of challenges, like Zoe's enthusiasm over the "Smoochy Boyz" concert, deciphering baby Wren's attempts at language, and determining Hammie's place as a colon in the school play---whether "colon" refers to punctuation or digestion remains undetermined. Armed with "performance-enhancing substances" (a.k.a., chocolate donuts), the perfectly normal MacPherson family will surely bring a barrage of smiles and laughter to familiar fans with their perfectly chaotic lives.

Baby Blues has enchanted new parents, grandparents, and kids alike since it first appeared on the comics pages in 1990. As the years passed, the list of newspapers carrying the feature has grown almost as fast as the MacPhersons' kids! Baby Blues now appears in more than 1,200 newspapers worldwide, and the adventures of America's favorite first-time parents have also been chronicled in 31 anthologies and four treasuries. In 1995, the National Cartoonists Society recognized Baby Blues as "Best Comic Strip of the Year."