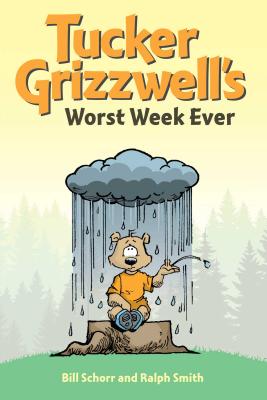 Tucker Grizzwell is having the worst week ever. He is due to attend the annual Jaws & Claws weekend with his dad, where young grizzlies learn how to be terrifying predators. Problem is, Tucker doesn't even like to eat meat, let alone have to kill it first! Plus, didn't some kid get eaten last year during the dumpster-diving lesson?

And before he can even get to the weekend, Tucker must endure a week's worth of middle school indignities, including pop quizzes, too much homework, bad cafeteria food, friends who are not the brightest lighthouses on the coast, an older sister who ignores him in the hallways, and one very unfortunate bus ride. The graphic novel format is perfect for the showcasing the daily trials and tribulations of this middle school grizzly cub.

“Expect this chuckle-rich yarn to appeal to a wide array of readers ranging from Sunday-comics aficionados (there are particular nods to Garfield and Calvin and Hobbes) to those who have grown up with the Berenstain Bears to fans of Jeff Kinney's Greg Heffley. For fans of the funny papers—and goodness knows, there are many.”  (Kirkus Reviews)

"If you and your kids like the humor of The Grizzwells, then you'll enjoy this longer tale about the family." (GeekDad)

Bill Schorr began his career as an editorial cartoonist for the Kansas City Star. He then spent several years with the Los Angeles Herald Examiner before returning again to the Star. He was staff editorial cartoonist at the New York Daily News from 1997 to 2001. Born in New York City, Schorr grew up in Albuquerque, N.M., and Riverside, Calif.
Loading...
or
Not Currently Available for Direct Purchase