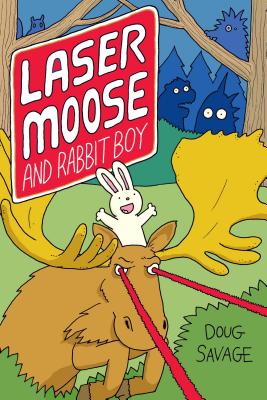 Batman and Robin meet Rocky and Bullwinkle. Through a series of fun adventure stories, Laser Moose, who can shoot lasers from his eyes, and his sidekick, Rabbit Boy, endeavor to save the forest from looming threats.

The forest is full of danger . . .  but help is here. Meet Laser Moose and Rabbit Boy, improbable pals who use their powers—laser vision and an unrelenting sense of optimism—to fight the forces of evil. Join the dynamic duo as they battle aliens, a mutant fish-bear, a cyborg porcupine, and a mechanical squirrel, learning along the way that looking on the bright side might be just as powerful as shooting a laser.

Get ready for hilarious, action-packed, laser-powered adventures written and drawn by Doug Savage, creator of the popular comic Savage Chickens. This is Savage’s first graphic novel.

“With rampant whimsy and cheerful silliness, expect this to hit funny bones with laser accuracy.” (Kirkus)

"Middle grade readers who like their sci-fi and superhero stories zany, crazy, and with lots of ironic humor will enjoy these adventures." (Kat Kan, Booklist)

"Wry, accessible humor, often conveyed without text...and bright, chipper colors hearken back to Sunday comics. It's an odd concept, but an irresistible one; this is going to be a hit across a wide range of readers." (The Bulletin of the Center for Children's Books)

"Big-hearted, dotty fun for kids from eight to 11 and pretty much everyone else." (The Georgia Straight)

Savage Chickens began on a rainy day in October 2004 when, after one too many migraines, Doug Savage scribbled two chickens on a sticky note. Almost eight years and 2000 cartoons later, Savage Chickens is now a popular website with millions of readers. Savage still draws every cartoon on yellow sticky notes, and his cartoons cover an eclectic range of topics, including: work, psychology, arachnophobia, pop culture, cats, time travel, love, zombies, and more.
Loading...
or support indie stores by buying on