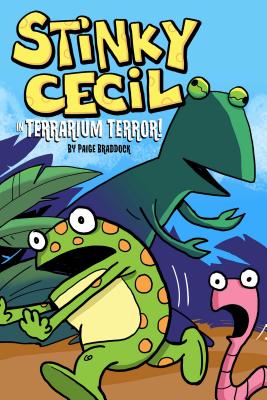 Stinky Cecil is back in a hilarious new adventure!

Cecil and his amphibian pals are taking a well-deserved break after saving their pond from freeway construction when a third-grade science class shows up for a field trip. The kids nab Cecil for their classroom terrarium!

At first Cecil is terrified, but he quickly gets used to being a class pet. That is, until Nesbit the chameleon shows up. Nesbit wants to be just like Cecil, so he matches his colors and follows him all around the terrarium. He’s driving Cecil crazy!

Meanwhile, Cecil’s pals back at the pond are planning a rescue mission using Jeff the hamster’s radio controlled helicopter. But what will they do about Nesbit?

"There's plenty of fhumor, and Braddock continues to cleverly weave science tidbits into the story, so young readers will truly devour this adventure...Bonus points for the science. As for my son...he loved the title. He had plenty of questions along the way, hoping to get a better grasp of some of the science aspects of the story." (Esther Keller, School Library Journal's "Good Comics for Kids" Blog)

Paige Braddock is the Creative Director at Charles M. Schulz Creative Associates.  Braddock had the opportunity to train under Schulz, her childhood hero, prior to his retirement. She has illustrated several “Peanuts” children’s books, the Snoopy U.S. postage stamp issued in 2001, and the Newsweek cover featuring Snoopy following  Schulz’s death in 2000.
Loading...
or
Not Currently Available for Direct Purchase