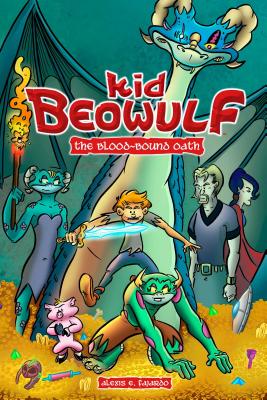 “What Rick Riordan did for the Greek gods, Fajardo has done for ‘Beowulf’: magnificent.”

If you liked Percy Jackson, you'll love Kid Beowulf! Inspired by the epic poem "Beowulf," this fun new series follows the adventures of 12-year-old twin brothers Beowulf and Grendel as they travel to distant lands and meet fellow epic heroes!

In book one of the series by Alexis E. Fajardo, our heroes' destiny is tied to the past, when a prince named Hrothgar begins a quest for power—one that leads him to a fiery dragon, an enchanted sword, and an oath sworn in blood. But when Hrothgar breaks his oath he breaks his kingdom, and the only thing that will save it is a family he’s forgotten and heroes not yet born…

“What Rick Riordan did for the Greek gods, Fajardo has done for ‘Beowulf’: magnificent.” (Kirkus)

"Fajardo takes one of the most recognizable pieces in English literature and makes it fully accessible to younger and struggling readers...capturing the attention of even the most unfocused readers...Hand to graphic novel fans who love action and adventure.” (John Trischitti, School Library Journal)

“…a richly imagined tale…humorous and engrossing adventures.” (The Bulletin of the Center for Children's Books)

“In the grand tradition of Bone, Amulet, and countless other epic quest graphic novels, Fajardo gives us heroes to root for, villains to loathe, and complex characterizations around every turn.” (Elizabeth Bird, School Library Journal's FUSE 8 blog)

Alexis E. Fajardo is a student of the classics—whether Daffy Duck or Damocles—and has created a unique blend of the two with Kid Beowulf. When he's not drawing comics, he works for them at the Charles M. Schulz Studio in Santa Rosa, California. Lex does not live in a castle but would like to one day with his wife and his dog, Loki.
Loading...
or
Not Currently Available for Direct Purchase