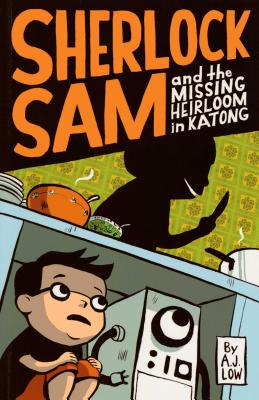 Sherlock Sam and the Missing Heirloom in Katong

An exciting new update of the classic Sherlock Holmes detective stories in which Sherlock is a 10-year-old kid living in Singapore and Watson is his trusty robot companion!

Introducing the Sherlock Sam series by A.J. Low—a fresh, cross-cultural twist on the classic Sherlock Holmes stories, tailored for middle-grade readers. Set in iconic Singapore locations, the series follows the mystery-solving exploits of smart, observant, food-loving 10-year-old Samuel Tan Cher Lock (a.k.a. Sherlock Sam), Watson, his reluctant robot sidekick, and the rest of the Supper Club (a “Scooby Doo gang,” of sorts) as they prove that mysteries are best solved through teamwork.
In Sherlock Sam and the Missing Heirloom in Katong, Auntie Kim Lian’s precious Peranakan cookbook disappears, and Sherlock Sam cannot eat her delicious ayam buah keluak anymore! Will Sherlock Sam be able to use his super detective powers to find this lost treasure?

“A thrilling kid’s detective romp in the grand tradition of Famous Five, with a lovable robot and delicious Peranakan food!”
—Otto Fong, author of Sir Fong’s Adventures In Science

“Sherlock Sam and Watson are set to become one of Singapore’s favourite detective duos! Sam’s preoccupation with food struck a familiar chord with the Singaporean in me and Watson’s deadpan one-liners had me laughing out loud. What afun-filled, food-filled adventure story! This is a delicious read that will certainly warm your heart like a good serving of ayam buah keluak!”
—Emily Lim, award-winning author of Tibby, the Tiger Bunny and Prince Bear & Pauper Bear

“Watson is a delightful creation. He follows a rich line of great robot companions from Star War’s R2D2 to Star Trek’s Data; no detective should leave home without one!”
—Sonny Liew, Eisner-nominated author of Malinky Robot

“This book will definitely draw you in with its twists and turns that will leave you guessing with each turn of the page who the culprits are. There are also many funny lines from Watson that will cause you to burst out in laughter.”
—Seow Kai Lun, ?Singapore's Child

“This debut local novel is rich (in local references) and satisfying (as a mystery story).”
—Stephani Yeo, Young Parents

“BOTH boys were clamouring to read the book first, so I was left with no choice but to read the book TOGETHER with the both of them...I found it to be utterly captivating enough to make me want to complete the book in one sitting...the localized dialogue is hilariously tongue-in-cheek and the book's subtle appeal to a child's instinct for the mysterious proved to be just what kept both Ash and Ayd deeply intrigued.”
—Kelvin Ang, Cheekiemonkies

“A.J. Low have created an intriguing tale which would keep young readers eager to find out what happens next, while subtly documenting old-school landmarks such as Chin Mee Chin Confectionery and Katong Antique House. Looks set to be a betseller.”
—Clara Chow, My Paper

“I like this book because it leaves you with questions in your mind which make you want to keep reading.”
—Greta Roberts, 9, in Expat Living Singapore

Praise For Sherlock Sam and the Missing Heirloom in Katong: book one…

"The book overall is fun and a little silly. The story is interesting to follow, and I was never bored. I would recommend it for anyone who likes a fun mystery or sassy robots.” -- Myron, age 10. (Kids' Book Buzz)

Behind the pseudonym A.J. Low are husband and wife team Adan Jimenez and Felicia Low-Jimenez. Adan previously co-wrote a children’s book, Twisted Journeys #22: Hero City. He loves comics, LEGO®, books, movies, games (analog and video) and Doctor Who. Felicia spent most of her childhood with her head in the clouds and her nose buried in a book. The Sherlock Sam series is Felicia’s debut writing effort, after accumulating years of experience buying, selling and marketing books.
Loading...
or
Not Currently Available for Direct Purchase