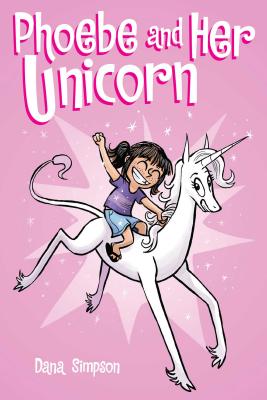 "Phoebe is a remarkably real little girl, as bright and imaginative as Bill Watterson's Calvin, as touchingly vulnerable as Charles Schulz's Charlie Brown...Simpson is that good, and that original."
--Peter S. Beagle, author of The Last Unicorn

It all started when a girl named Phoebe skipped a rock across a pond and accidentally hit a unicorn in the face. Improbably, this led to Phoebe being granted one wish, and she used it to make the unicorn, Marigold Heavenly Nostrils, her obligational best friend. But can a vain mythical beast and a nine-year-old daydreamer really forge a connection? Indeed they can, and that's how Phoebe and Her Unicorn unfolds.

This beautifully drawn comic strip follows the unlikely friendship between a somewhat awkward girl and the magic unicorn who gradually shows her just how special she really is. Through hilarious adventures where Phoebe gets to bask in Marigold's "awesomeness," the friends also come to acknowledge that they had been lonely before they met and truly appreciate the bond they now share.

"Readers in need of a good friend can curl up with this title. They won’t be sorry." (Esther Keller, School Library Journal's Good Comics for Kids blog)

"…unique and witty…Simple line drawings bring the characters to life without detracting from the clever dialogue…those looking for something to read after Jenni Holm’s 'Babymouse' books might want to take a look.” (Barbara Moon, School Library Journal)

"...the friendship between [Phoebe and Marigold] is impeccably developed…Rich humor lies in the illustrations…" (The Bulletin of the Center for Children's Books)

“Situational humor will appeal to all regardless of gender. The volume contains chuckles and pop references that will entertain the most skeptical adults as well as the target audience.” (Library Media Connection)

Included in the “Your pre-approved list of feminist books for all the kids in your life” roundup. (Caroline Gerdes, Hello Giggles)

She currently lives in Santa Barbara, California, with her tech genius husband and her fairly stupid cat.
Loading...
or
Not Currently Available for Direct Purchase