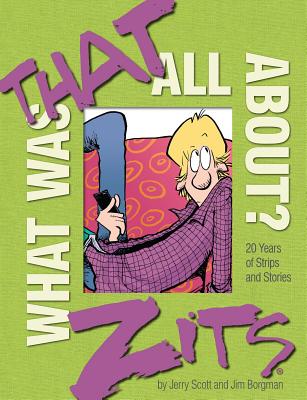 What Was That All About?

20 Years of Strips and Stories (Zits)

What Was That All About? looks back at the 20-year whirlwind life of the Duncan family, the inhabitants of the popular, modern family cartoon Zits.

What Was That All About? is the perfect celebration of Zits' twentieth anniversary! Always spot-on, sometimes chaotic, and often messy comic moments are immortalized by the true-to-life give and take between Jeremy and his often befuddled parents.

Authors Jerry Scott and Jim Borgman have sifted through the highlights (and some lowlights!) over the life of the strip and have created a unique behind-the-scenes, insightful view into the history of Zits. They have selected their all-time favorite cartoons to fill the collection along with special features, including stories about:

• How they met in Sedona, Arizona, and came up with the crazy idea of creating Zits

• The teenagers in their own lives

• Strips that newspapers declined to publish, or words they censored, etc.

• Sucks, bites, and blows: staking out territory on the comic page

Excerpts from their sketchbooks will also be shown.

This is the book every fan of Zits has ever wanted!


Co-creator Jim Borgman and his wife are the proud parents of five children. He has also won a Reuben Award and a Pulitzer Prize. Both he and Jerry have LOTS of experience with teenagers.
or support indie stores by buying on