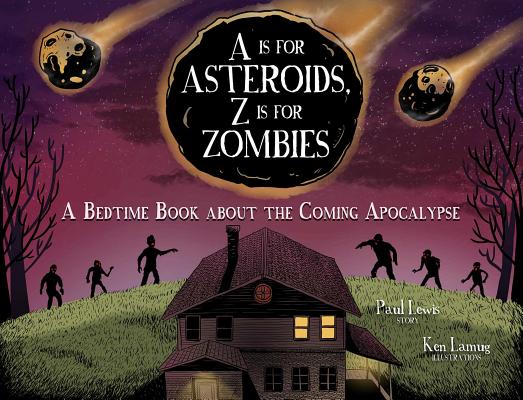 A Is for Asteroids, Z Is for Zombies

A Bedtime Book about the Coming Apocalypse

A darkly comic fable that offers visions of the apocalypse for every letter of the alphabet.


Starting with a father whose son has been asking questions about global dangers, A Is for Asteroids, Z Is for Zombies takes us inside our worst fears, laughing at some and taking others seriously. With macabre verse and fantastically gory illustrations, it provides gallows humor for our doom-haunted times.

Paul Lewis teaches American literature and writing workshops at Boston College, and he brings a career-long interest in dark humor to the writing of A Is for Asteroids, Z Is for Zombies. A student of gothic and gallows humor, Lewis has written extensively on these strains in U.S. popular culture, most notably in his book Cracking Up: American Humor in a Time of Conflict (UChicago Press, 2006). The neologist who coined the words “Frankenfood” and “lackspertise” in a letter he wrote to the New York Times, Lewis has published op-ed, feature, and humor pieces in leading newspapers.

Kenneth Kit Lamug is a filmmaker, photographer, author, and illustrator with 27,000 Twitter followers. He is best known for his children’s picture book A Box Story (RabbleBox, 2011); an adult humor book Hurts Like a Mother: A Cautionary Alphabet (Doubleday, 2016); and as co-creator of the independent film Vegasland.
Loading...
or
Not Currently Available for Direct Purchase