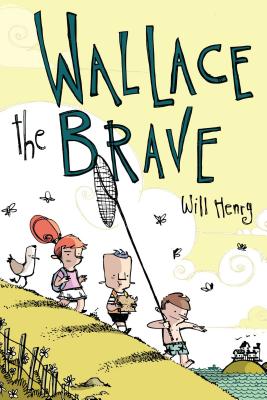 "Wallace the Brave is a little taste of classic comics from the past."
—The Huffington Post

Welcome to Snug Harbor! Will Henry's Wallace the Brave is a whimsical comic strip that centers around a bold and curious little boy named Wallace, his best friend Spud and the new girl in town, Amelia. Wallace lives in the quaint and funky town of Snug Harbor with his fisherman father, plant loving mother and feral little brother, Sterling.

Praise For Wallace the Brave…

"If you like the humor in Calvin and Hobbes, you must read Wallace the Brave. It’s totally hilarious. You’ll laugh your say through stories of Wallace’s life on the school bus, on the playground, playing with friends, hanging with his fisherman dad, and more. I’m smiling just writing this as I think back on Wallace’s antics and adventures. Very entertaining!" (Imagination Soup)

Will Henry is the creator behind Ordinary Bill and Wallace the Brave, both distributed on GoComics.com. His professional career began with his strip Room Mates, which was published in The Daily Campus during his time at the University of Connecticut. He draws his inspiration from everyday life and in the age of the smart-phone, he aims to re-create a world in which kids “still collect bugs and fly kites and eat ice cream cones upside-down.” He lives in Rhode Island with his wife, his cat, and his mistress, the sea.
Loading...
or support indie stores by buying on