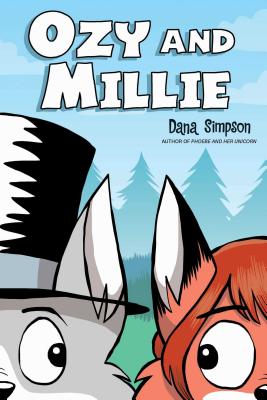 Meet Ozy and Millie, two middle-grade students in Seattle who happen to be foxes. Millie is a mischievous 10-year-old with a talent for evading homework, a habit of questioning authority, and a knack for inventing bizarre jump rope rhymes. Ozy is her calm, thoughtful counterpart, whose adoptive father, a red dragon named Llewellyn, is full of strange stories and ancient wisdom. Also featured are Felicia, a sheep at the head of the cool clique, and Avery, a hapless raccoon who desperately wants to be popular.

In this collection of funny and charming comics, the sweet, philosophical humor of author Dana Simpson (Phoebe and Her Unicorn) shines through. Evocative, funny, and gently philosophical, Ozy and Millie will delight young readers with tales of friendship and school-age fun, while transporting older fans back to the openness and wonder of childhood. Ozy and Millie also includes an introduction by the author and a "More To Explore" section with a glossary and how-to-draw section for young readers.