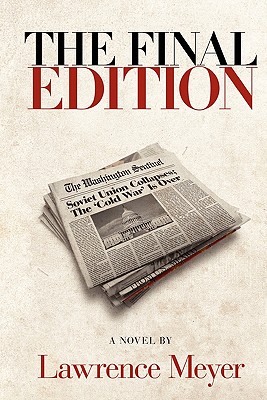 The Final Edition is the compelling story of an American newspaper and the family that owns it, from the Civil War to the end of the 20th century. Beginning in the last days of the Civil War, it tells the story of the rise and heyday of newspapers. For the next 60 years they were the source-the only source-of information about politics and sports, scandal and tragedy. No informed American could afford to be without one. Neither radio nor television dislodged the dominance of newspapers in informing America. Newspaper publishers were political aristocrats, wielding enormous power; newspaper families were among the social elite in cities across America. The Final Edition, Lawrence Meyer's third novel, is the story of a great newspaper, the Washington Sentinel, "a watchman in the night," fearlessly protecting the public interest above all. It is also a vibrant account of family intrigue over control of Washington's most powerful newspaper. Spanning five generations, Presidents Abraham Lincoln, Teddy Roosevelt, Franklin D. Roosevelt, Dwight Eisenhower and John Kennedy are among the key figures whose lives are woven into the fabric of this compelling and informative novel. The Final Edition offers readers a richly detailed glimpse behind the scenes of a fictional but all too real American newspaper, bringing exciting moments in American history to life. It is a story as current and relevant as today's headlines, as a great newspaper struggles to survive. Most engrossingly, it is the epic story of one powerful family's rise and fall, a gripping portrait of an elite family caught in personal and national turmoil and social change. Lawrence Meyer, a veteran journalist as well as novelist, was an award-winning reporter at two newspaper dynasties, the Louisville Times and The Washington Post. He brings that experience and a fine knowledge of American history to bear in a powerful, entertaining novel that will captivate readers of all ages.

Lawrence Meyer is a veteran, award-winning newspaper reporter and editor. He spent thirty-two years at The Washington Post, where he witnessed many of the twentieth century's most dramatic events. During the 1970s, he covered the attempted assassination of Governor George C. Wallace, the Watergate break-in trial, the Senate Watergate hearings, and the subsequent impeachment proceedings against President Richard Nixon. His intimate familiarity with the thinking and politics at the heart of a great American newspaper lends remarkable accuracy and immediacy to The Final Edition. Meyer has published three other books. His second novel, False Front, was nominated for the American Book Award.
Loading...
or support indie stores by buying on