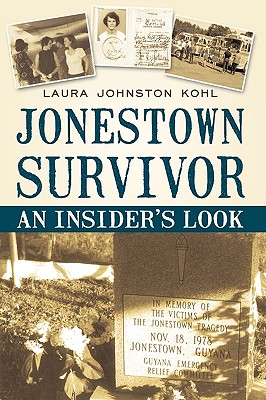 Laura Johnston Kohl was a teen activist working to integrate public facilities in the Washington, D.C., area. She actively fought for civil rights and free speech, and against the Vietnam War throughout the 1960s. After trying to effect change single-handedly, she found she needed more hands. She joined Peoples Temple in 1970, living and working in the progressive religious movement in both California and Guyana. A fluke saved her from the mass murders and suicides on November 18, 1978, when 913 of her beloved friends died in Jonestown.

Soon after this, Synanon, a residential community, helped her gradually affirm life. In 1991, she got to work, finished her studies, and became a public school teacher. On the 20th anniversary of the deaths in Jonestown, she looked up fellow survivors of the Jonestown tragedy and they have worked to put the jigsaw puzzle together that was Peoples Temple. Her perspective has evolved as new facts have cleared up mysteries and she has had time to reflect. Her mission continues to be to acknowledge, write about, and speak about why the members joined Peoples Temple, why they went to Guyana, and who they were. She lives with her family in San Diego.

Laura Johnston Kohl joined Peoples Temple, and unbelievably survived when her friends died in Jonestown in November 1978. Always a political radical, this white woman was involved in and accepted by the Black Panthers. She returned to live in Synanon, become a parent, a teacher, a Quaker, and published author.
or support indie stores by buying on