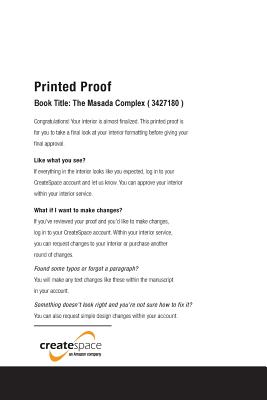 Could a major scandal cause the United States to terminate its support for Israel? The Masada Complex, a contemporary thriller set in Arizona, Washington, and Israel, gives us a chilling portrayal of exactly such a scenario. The novel's unforgettable hero is Masada El-Tal, a beautiful Israeli expatriate who grew up on a kibbutz by the Dead Sea and served in an IDF elite unit. But her charmed life was struck by disaster 25 years, and left Israel for Arizona, where has built a new life, earning a reputation as a prizewinning investigative reporter. But her latest story causes the suicide of a U.S. senator, and an unprecedented wave of anti-Semitic violence sweeps across America. While an angry Congress prepares to enact legislation to suspend all military aid to Israel, a mysterious organization attempts to assassinate Masada in order to stop her relentless investigation. With the clock ticking, her friends turn out to be enemies, and those she has maligned come to her aid. And the truth Masada uncovers exceeds her worst nightmares. Like the Jewish homeland she has left, Masada must overcome her moral dilemmas in order to defeat her mortal foes and save her people from destruction."A first-rate thriller with exciting plot twists and engaging characters. Every page brims with gritty authenticity. The Masada Complex is a genuine treat for readers who love thrillers with a realistic, international flavor." David Liss, author of The Whiskey Rebels and Conspiracy of Paper, winner of Edgar."As good as DeMille and Follett The Masada Complex delivers fast pace, brilliant plot, unforgettable characters, and a mesmerizing premise. Terrific " Stephen J. Wall, author of The Morning After and The New Strategists."The Masada Complex is a riveting portrayal of global intrigue against the backdrop of the American southwest; investigative reporter Masada El-Tal is a hard-hitting IDF veteran who pursues her diabolical enemies to the ends of the earth in her unfathomable quest-to uncover the truth " Stella Pope Duarte, author of If I Die in Juar z and Woman who Live in Coffee Shops and Other Stories, winner of the 2009 American Book Award.

Avraham Azrieli served honorably as an Intelligence-Corps officer in the Middle East before attending Columbia Law School in New York. His previous books are Your Lawyer on a Short Leash and One Step Ahead - a Mother of Seven Escaping Hitler. When not writing books, he rides an enduro motorbike through back-country terrain.
Loading...
or support indie stores by buying on