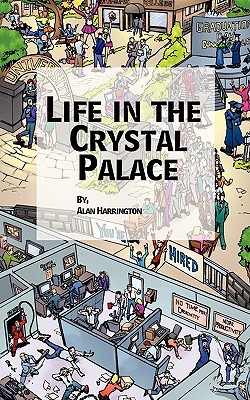 Life in the Crystal Palace

Thousands of men enter the crystal palace yearly. In time they must make a choice: accept the numbing security of big corporation life or revolt against submission. Especially in times of economic upheaval, this book makes the reader question their fear of loosing a job at a large corporation. Will you silently suffer for a paycheck, or will you stand up against the monotony and dullness of cubicle life? Life in the Crystal Palce has been published in England, Germany, and Japan. V.S. Pritchett described the book as "a deeply ironical and polished analysis of the welfare corporations," and its author as "devastating in his gentleness.

Alan Harrington was born in Newton, Massachusetts, and was graduated from Harvard University in 1939. He has worked for a wire service, as editor at the Republic of Indonesia Information Office in New York, and in advertising and public relations. For four years he served as an editor and writer in the public relations department of a large American corporation described in this book as "The Crystal Palace" Harrington's literary skill has been demonstrated in this remarkable novels, The Revelations of Doctor Modesto and The Secret Swinger.
Loading...
or support indie stores by buying on