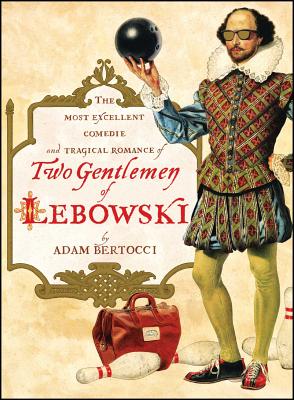 A Most Excellent Comedie and Tragical Romance

Dive into the humor and excitement of The Big Lebowski, but with the tradition of Shakespeare in this rewrite of the cult classic into five acts of iambic pentameter, featuring illustrations, annotations, and historical engravings.

What if…William Shakespeare had written The Big Lebowski?

The Dude has met the Bard—and he doth abide.

Join “The Knave” and Sir Walter on a wild tale of mistaken identity, kidnapping, bowling, and a rug that, in faith, really tied the room together—in a sidesplitting Shakespearean comedy of errors and ninepins, told in five glorious acts of iambic pentameter and impeccable period prose.

Praise For Two Gentlemen of Lebowski: A Most Excellent Comedie and Tragical Romance…

“Adam Bertocci has done a stellar job fusing the spirit of Shakespeare with The Big Lebowski. This mashup is one for the ages.”
—Scott Shuffitt, cofounding Dude of LebowskiFest and coauthor of I’m a Lebowski, You’re a Lebowski

“Gadzooks, methinks ’tis all as fine a way to waste an hour or so as I have come across in these four seasons.”
—Entertainment Weekly

“The mash-up that toke its time in coming.”
—Time Out New York

“Proves that Shakespearean sharp-tongued eloquence is nifty even in the 21st century, if wielded correctly. The play also proved that [The Big Lebowski] was quite Shakespearean to begin with.”
—Inside New York

“Should be quite the what-have-you.”
—Gothamist

"Arguably one of the most inventive pieces ever created.”
—Broadway World

“We were totally blown away to discover . . . this Swiss f*cking watch of a genius named Adam Bertocci. . . . Verily, Two Gentlemen of Lebowski has to be read to be believed. Zounds!”
—The Dudespaper (“A Lifestyle Magazine for the Deeply Casual”)

“Even those of us new to the Dude have become true believers in the Knave.”
—TheaterOnline

Adam Bertocci is a screen writer and filmmaker working in and around New York. His films have numerous awards and nominations at festivals across America with stops in England, Canada and Australia. He is a graduate of the film program at Northwestern University.
Loading...
or
Not Currently Available for Direct Purchase