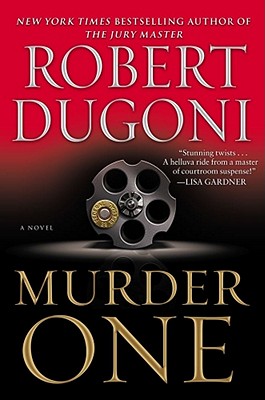 Finalist for the Harper Lee Prize for Legal Fiction:
New York Times bestselling author Robert Dugoni delivers another gripping legal thriller in his popular David Sloane series. The case? Defending the woman he loves against a charge of murder.

A year after the devastating murder of his wife, attorney David Sloane has returned to Seattle after three months in Mexico. At a black-tie dinner where he’s been persuaded to give the keynote address, Sloane reconnects with Barclay Reid, opposing counsel in his most prominent case. Barclay is suffering from her own personal tragedy—the death of her teenage daughter from a drug overdose. In the aftermath, Barclay has begun an intense crusade against the Russian drug traffickers she holds responsible for her daughter’s death, pursuing them with a righteousness that matches Sloane’s own zeal for justice. Despite their adversarial past, Sloane is drawn to Barclay and for the first time since his wife died, he finds himself beginning to have romantic feelings again.

But when Barclay’s crusade stalls and a Russian drug dealer turns up dead, she stands accused of murder, and Sloane is her chosen defender. Amid the swirling media frenzy, in his first criminal case, Sloane finds himself once again in harm’s way, while mounting evidence suggests that Barclay is a woman with many secrets—and may not be quite as innocent as she seems.

With his signature fast-paced, page-turning action and exhilarating plot twists, Robert Dugoni once again proves why he’s so often been named the heir to Grisham’s literary throne.

Praise For Murder One: A Novel…

"Tight plotting and well-developed characters push Dugoni to the head of the legal thriller pack in what is probably his finest book to date. John Grisham and Scott Turow fans should add Dugoni to their list of must-reads." —Library Journal (starred review)


“Dugoni has often been described as a challenger to Turow and other big names in the legal-thriller genre, but at this point, he’s claimed his own position on the A-list. A must read for fans of courtroom drama from Grisham to Turow to Erle Stanley Gardner.” —Booklist


“Dugoni has done it again! Taut courtroom scenes, stunning twists and deceptively dangerous men...and women. Be prepared for a helluva ride from a master of courtroom suspense!” —Lisa Gardner

“The verdict's in on Murder One—Robert Dugoni has written another first-class legal thriller. It's smart, taut, suspenseful and exquisitely plotted.” —Linda Fairstein

“With Murder One Robert Dugoni creates more twists and turns than a road in the Cascade Mountains. For readers who love detailed police work and spot-on courtroom drama, this is the book to look for. He’ll keep you guessing right till the end.” —Elizabeth George

“The best yet in the series.” —Publishers Weekly