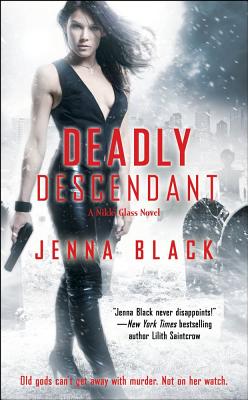 The second novel in a unique and action-packed urban fantasy series from the acclaimed author of the Morgan Kingsley series!

An ancient evil is unleashed in the modern world— unless one fearless P.I. can hunt it down. . . . Nikki Glass, Immortal Huntress, returns in this new novel in the acclaimed series by Jenna Black.

As a living descendant of Artemis the Huntress, private investigator Nikki Glass knows how to track someone down. But when an Oracle shows up, warning the Descendants about wild dog attacks in Washington, D.C., Nikki is afraid it might be a trap. The Olympians believe the “dogs” are really jackals, controlled by a blood-crazed descendant of the Egyptian death-god Anubis. Whatever. . . . If Nikki hopes to muzzle Dogboy, she’s got to catch him in the act. But when she stakes out a local cemetery, she ends up face-to-snout with a snarling pack of shadow-jackals whose bite is worse than their bark. These hellhounds are deadly—even for an immortal like Nikki. “Dog” spelled backward may be “god,” but that won’t stop Nikki from teaching these old gods some new tricks. Like playing dead.

Jenna Black is the author of Dark Descendant, Deadly Descendant, Pros and Cons, and Rogue Descendant, the first four works in her Immortal Huntress series. She is also the creator of the popular Morgan Kingsley urban fantasy series, the Guardians of the Night paranormal romance series, and the Faeriewalker young adult fantasy series. She once dreamed of being the next Jane Goodall, until she realized that primates spend 80 percent of their time not really doing anything. She moved on to such pastimes as grooming dogs and writing technical documentation before becoming a full-time writer of fiction. She lives in North Carolina. Visit her website at JennaBlack.com.
or
Not Currently Available for Direct Purchase
Copyright © 2020 American Booksellers Association