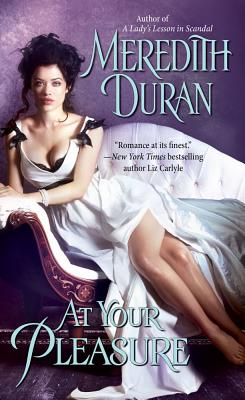 A new and evocative Regency historical novel from rising star Meredith Duran, an author for whom, as Fresh Fiction said, “readers need to make room on their keeper shelf.”

By candlelight, she lures him…

Glittering court socialites and underworld cutpurses alike know that Adrian Ferrers, Earl of Rivenham, is the most dangerous man in London. Rivenham will let nothing—not the deepening shadow of war, nor the growing darkness within him—interfere with his ambition to restore his family to its former glory. But when tasked by the king to uncover a traitor, he discovers instead a conspiracy—and a woman whose courage awakens terrible temptations. To save her is to risk everything. To love her might cost his life.

At swordpoint she defies him…

Lady Leonora knows that Rivenham is the devil in beautiful disguise—and that the irresistible tension between them is as unpredictable as the dilemma in which Nora finds herself: held hostage on her own estate by Rivenham and the king’s men. But when war breaks out, Nora has no choice but to place her trust in her dearest enemy—and pray that love does not become the weapon that destroys them both…

Praise For At Your Pleasure…

"The unusual setting and fascinating historical backdrop immediately set Duran's latest novel apart; then she adds in-depth characterization, intrigue and passion, drawing readers straight into her unforgettable romance. Rich in texture and color, detailed and absorbing, here is a novel to sink your teeth into." --RT Book Reviews (A "Top Pick")