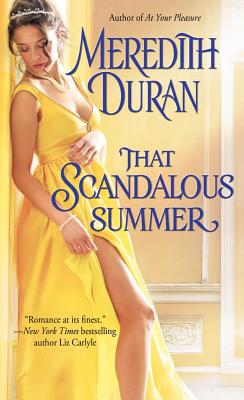 That Scandalous Summer (Rules for the Reckless #1)

When a wicked widow meets a sexy doctor, sparks fly in this sizzling and evocative Regency romance.

In the social whirl of Regency England, Elizabeth Chudderley is at the top of every guest list, the life of every party, and the belle of every ball. But her friends and admirers would be stunned to know the truth: that the merriest widow in London is also the loneliest. Behind the gaiety and smiles lies a secret longing—for something, or someone, to whisk her away. . . .

Raised in scandal, Lord Michael de Grey is convinced that love is a losing gamble—and seduction the only game worth playing. But when duty threatens to trump everything he desires, the only way out is marriage to a woman of his brother’s choosing. Elizabeth Chudderley is delightful, delicious—and distressingly attractive. With such a captivating opponent, Michael isn’t quite sure who is winning the game. How can such passionate players negotiate a marriage of necessity— when their hearts have needs of their own?

Praise For That Scandalous Summer (Rules for the Reckless #1)…

"Here's a sophisticated, witty, smart novel that, like a Mary Balogh romance, compels the reader to look deeper into the story and uncover great depth as well as grand passion. Some of the charm comes from Duran's ability to take a character who appears one way on the surface and allow a glimpse into their soul, giving readers a better understanding of humanity and the power of love."
— Romantic Times (A Top Pick)