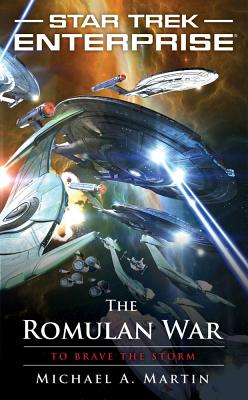 The Romulan Star Empire engages in all out war against Earth, determined once and for all to stop the human menace from spreading across the galaxy.

The Coalition of Planets has shattered, with Vulcan, Andor, and Tellar abrogating the treaty. Their pledge to come to the mutual defense of any power that is attacked has been shunted aside. Horrified by how easily the Romulans can seize control of their advanced starships, turning them into weapons, Andor and Tellar have joined Vulcan on the sidelines. Humanity is now the only thing that stands between the Romulan Star Empire and total domination of the galaxy.

To drive humans from the stars, the Romulans employ ruthless and murderous tactics...and even dare to strike on the Vulcan homeworld with the hopes of demoralizing their Vulcan brethren. Heartened by their victories, the Romulans carry their all-out war assault closer to the heart of humanity—Earth.

But the tattered remains of Starfleet stand unwavering, with the resolution that never again would any enemy strike ever reach Earth. On the front lines of the Earth- Romulan War is the United Earth flagship, the Starship Enterprise. Her captain, Jonathan Archer, has seen his vessel of exploration become a battleship. Once hailed for his work bringing the Coalition of Planets into existence, Archer is now a pariah. Undaunted, the captain keeps fighting, searching for allies and determined to do his duty: to save Earth and forge a new federation of planets.

Michael A. Martin's solo short fiction has appeared in The Magazine of Fantasy & Science Fiction. He has also coauthored (with Andy Mangels) several Star Trek comics for Marvel and Wildstorm and numerous Star Trek novels and eBooks, including the USA Today bestseller Titan: Book One: Taking Wing; Titan: Book Two: The Red King; the Sy Fy Genre Award-winning Star Trek: Worlds of Deep Space 9 Book Two: Trill -- Unjoined; Star Trek: The Lost Era 2298 -- The Sundered; Star Trek: Deep Space 9 Mission: Gamma: Vol. Three: Cathedral; Star Trek: The Next Generation: Section 31 -- Rogue; Star Trek: Starfleet Corps of Engineers #30 and #31 ("Ishtar Rising" Books 1 and 2); stories in the Prophecy and Change, Tales of the Dominion War, and Tales from the Captain's Table anthologies; and three novels based on the Roswell television series. His most recent novels include Enterprise: The Romulan War and Star Trek Online: The Needs of the Many. His work has also been published by Atlas Editions (in their Star Trek Universe subscription card series), Star Trek Monthly, Dreamwatch, Grolier Books, Visible Ink Press, The Oregonian, and Gareth Stevens, Inc., for whom he has penned several World Almanac Library of the States nonfiction books for young readers. He lives with his wife, Jenny, and their two sons in Portland, Oregon.
or
Not Currently Available for Direct Purchase
Copyright © 2020 American Booksellers Association