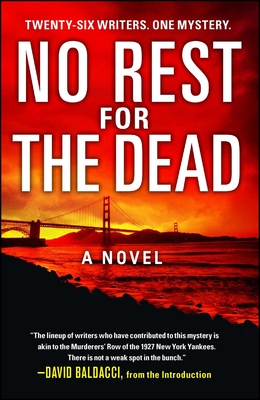 No Rest for the Dead

“The lineup of writers who have contributed to this mystery is akin to the Murderers’ Row of the 1927 New York Yankees. There is not a weak spot in the bunch.” —David Baldacci, from the Introduction

Alexander McCall Smith. Sandra Brown. Faye Kellerman. J.A. Jance. Jeffery Deaver. Kathy Reichs. Lisa Scottoline. Jeff Lindsay. These are only a handful of the names that make up the all-star lineup of authors behind No Rest for the Dead, a tale of vengeance, greed, and love that flows seamlessly, in the words of David Baldacci, “as it passes from one creator’s mind to the next.”

When Christopher Thomas, a ruthless curator at San Francisco’s McFall Art Museum, is murdered and his decaying body is found in an iron maiden in a Berlin museum, his wife, Rosemary, is the primary suspect, and she is tried, convicted, and executed. Ten years later, Jon Nunn, the detective who cracked the case, is convinced that the wrong person was put to death. In the years since the case was closed, he’s discovered a web of deceit and betrayal surrounding the Thomases that could implicate any number of people in the crime. With the help of the dead woman’s friend, he plans to gather everyone who was there the night Christopher died and finally uncover the truth, suspect by suspect. Solving this case may be Nunn’s last chance for redemption…but the shadowy forces behind Christopher’s death will stop at nothing to silence the past forever.

In this innovative storytelling approach, each of these twenty-five bestselling writers brings their distinctive voice to a chapter of the narrative, building the tension to a shocking, explosive finale. No Rest for the Dead is a thrilling, page-turning accomplishment that only America’s very best authors could achieve.

Praise For No Rest for the Dead: A Novel…

"'No Rest for the Dead’ is more than just a stunt. Anyone who loves a good mystery will love this book and to top it off proceeds go to a good cause.”
--CNN.com, 'Hot Summer Reads'

“The plot was gritty, suspenseful, and compelling. It was definitely everything I would expect from authors I've come to love, and authors I'm hoping to get to know better.”
--Freshfiction.com

“It's a fast-paced mystery that will have the reader guessing until the final chapter."
--Blogcritics.org

"The end result is an interesting mystery that deftly weaves the contributions of these great authors into a surprisingly cogent and surprising mystery."
--NewMysteryReader.com

Sandra Brown is the author of seventy-one New York Times bestsellers. Brown began her writing career in 1981 and since then has published over seventy novels, most of which remain in print. Sandra and her husband, Michael Brown, live in Arlington, Texas.

He’s received or been shortlisted for a number of awards around the world, including Novel of the Year by the International Thriller Writers and the Steel Dagger from the Crime Writers' Association in the United Kingdom. In 2014, he was the recipient of three lifetime achievement awards. A former journalist, folksinger, and attorney, he was born outside of Chicago and has a bachelor of journalism degree from the University of Missouri and a law degree from Fordham University.
or support indie stores by buying on