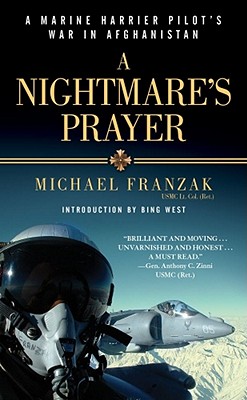 Winner of the 2012 Colby Award and the first Afghanistan memoir ever to be written by a Marine Harrier pilot, A Nightmare’s Prayer portrays the realities of war in the twenty-first century, taking a unique and powerful perspective on combat in Afghanistan as told by a former enlisted man turned officer. Lt. Col. Michael “Zak” Franzak was an AV-8B Marine Corps Harrier pilot who served as executive officer of VMA-513, “The Flying Nightmares,” while deployed in Afghanistan from 2002 to 2003. The squadron was the first to base Harriers in Bagram in support of Operation Enduring Freedom. But what should have been a standard six-month deployment soon turned to a yearlong ordeal as the Iraq conflict intensified. And in what appeared to be a forgotten war half a world away from home, Franzak and his colleagues struggled to stay motivated and do their job providing air cover to soldiers patrolling the inhospitable terrain.

I wasn’t in a foxhole. I was above it. I was safe and comfortable in my sheltered cocoon 20,000 feet over the Hindu Kush. But I prayed. I prayed when I heard the muted cries of men who at last understood their fate.

Franzak’s personal narrative captures the day-by-day details of his deployment, from family good-byes on departure day to the squadron’s return home. He explains the role the Harrier played over the Afghanistan battlefields and chronicles the life of an attack pilot—from the challenges of nighttime, weather, and the austere mountain environment to the frustrations of working under higher command whose micromanagement often exacerbated difficulties. In vivid and poignant passages, he delivers the full impact of enemy ambushes, the violence of combat, and the heartbreaking aftermath.

And as the Iraq War unfolded, Franzak became embroiled in another battle: one within himself. Plagued with doubts and wrestling with his ego and his belief in God, he discovered in himself a man he loathed. But the hardest test of his lifetime and career was still to come—one that would change him forever.

A stunning true account of service and sacrifice that takes the reader from the harrowing dangers of the cockpit to the secret, interior spiritual struggle facing a man trained for combat, A Nightmare’s Prayer brings to life a Marine’s public and personal trials set against “the fine talcum brown soot of Afghanistan that permeated everything—even one’s soul.”

Praise For A Nightmare's Prayer: A Marine Harrier Pilot's War in Afghanistan…

“Mike Franzak has written a brilliant and moving account of the war in Afghanistan from a unique perspective. As a Marine Harrier pilot, he offers an unvarnished and honest view of combat in this strange land. A Nightmare’s Prayer is a must read for all those who seek an exceptional insight into a complex war.”

“Every combat aviator will instantly recognize Franzak’s work as compellingly


authentic and honest. This is a book for grown-ups; an effort that treats the

personal as well as the professional aspects of wartime flying. A

to come out of the War on Terror.”

—Lieutenant Colonel Jay A. Stout (retired), author of Hammer from Above: Marine Air Combat Over Iraq

“Mike Franzak’s account of the Flying Nightmares’ twelve month deployment to Afghanistan provides a rare look at an attack squadron at war. His vivid descriptions of the challenges of flying and fighting in that austere and dangerous environment will reinforce the faith of ground Marines in the dedication and skill of their flying counterparts. A Nightmare’s Prayer provides an inside view of a largely overlooked element of the fight in Afghanistan.”


—T. X. Hammes, author of The Sling and the Stone

“Franzak’s vivid writing puts you inside his jet, and also inside his head. This is a gripping account of a Marine pilot’s fight to help win a war—and to make peace with himself.”


—Nathaniel Fick, author of the New York Times bestseller One Bullet Away

"A compelling and powerful combat memoir of a Marine Harrier pilot's deployment in Afghanistan—the war we never hear about."

"Mike Franzak has written an important literary memoir about the close-air support in Afghanistan from the perspectives of a night attack, single-seat Harrier jump jet pilot and senior officer. Zak's cockpit was dangerous, dark, and lonely. The crying pleas of distressed soldiers on the ground required quick and precise bombing decisions that meant life or death. Read A Nightmare's Prayer, the best personal narrative about Marine Corps aviation since Gregory Boyington's bestselling Baa Baa Black Sheep."

—Quang Pham, author of A Sense of Duty: Our Journey from Vietnam to America

Michael “Zak” Franzak is a recently retired lieutenant colonel who served as an AV-8B Marine Corps Harrier pilot in Afghanistan. He lives in Raleigh, North Carolina with his wife, son, and daughter. A Nightmare's Prayer is his first book, and the winner of the 2012 Colby Award.