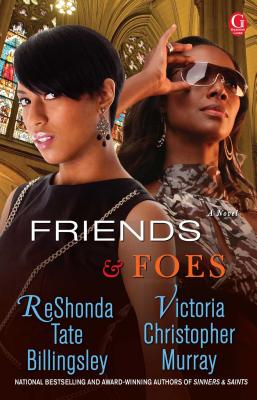 Bestselling and award-winning novelists ReShonda Tate Billingsley and Victoria Christopher Murray bring their favorite heroines together in a novel that’s “double the fun...a match made in heaven” (Grace Magazine).

Now that Rachel Jackson Adams’s husband has won the coveted position of president of the American Baptist Coalition, Jasmine Larson Bush has concocted a scheme to one-up her rival—by promoting her new community center on the nation’s #1 television talk show. The power play won’t stop Rachel, who jets from Houston to Chicago to sabotage Jasmine’s TV appearance. But Chicago is the last place Rachel should be when one of the Coalition’s heaviest hitters turns up dead—and Rachel looks guilty as sin. Will her nemesis leave her stranded and let her take the rap? Or will Jasmine help Rachel hunt down a killer? Could danger this deep turn the enemies into BFFs? After all, miracles do happen.

“Frenetic and deliciously slapstick sequel to Sinners & Saints…These frenemies [Rachel Jackson Adams and Jasmine Larson Bush] are drama queens at their best and smartest, a combination that will leave fans praying for their further misadventures.”
— Publishers Weekly

ReShonda Tate Billingsley’s #1 nationally bestselling novels include Let the Church Say Amen, I Know I’ve Been Changed, and Say Amen, Again, winner of the NAACP Image Award for Outstanding Literary Work. Her collaboration with Victoria Christopher Murray has produced four hit novels, Sinners & Saints, Friends & Foes, A Blessing & a Curse, and Fortune & Fame. BET released a movie in 2013 based on ReShonda’s book Let the Church Say Amen in which she had a minor role. She also had a role in the made-for-TV movie The Secret She Kept based on her book of the same title. Visit ReShondaTateBillingsley.com, meet the author on Facebook at ReShondaTateBillingsley, or follow her on Twitter @ReShondaT.

Victoria Christopher Murray is the author of more than twenty novels including: Greed; Envy; Lust; The Ex Files; Lady Jasmine; The Deal, the Dance, and the Devil; and Stand Your Ground, which was named a Library Journal Best Book of the Year. She is also the coauthor of the novel The Personal Librarian. Winner of nine African American Literary Awards for Fiction and Author of the Year (Female), Murray is also a four-time NAACP Image Award Nominee for Outstanding Fiction. She splits her time between Los Angeles and Washington, DC. Visit her website at VictoriaChristopherMurray.com.
Loading...
or support indie stores by buying on