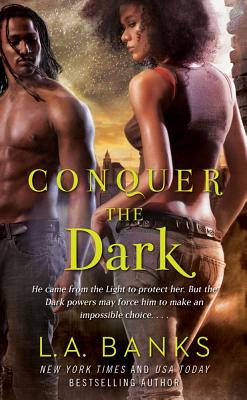 Celeste Jackson never had much hope for the future—and certainly never imagined that she would be living in an abandoned warehouse in Philadelphia with her magnificent protector Azrael, the angel of death, and a fierce battalion of warrior angels. But although her powers have bestowed the angels with the freedom to return to the Light or stay within the mortal realm, they need her more than ever.

Celeste is one of the few remaining half-human, half-angel Remnant, with a unique ability to locate others of her kind. The search leads Azrael and his celestial brothers to Egypt to recover a powerful relic that can raise an army of bloodthirsty fallen if it falls into the wrong hands. It is a relic the dark angel Asmodeus will do anything to possess—and his quest puts Celeste in mortal danger. Soon Azrael faces an impossible decision: Can he surrender the woman who has become his salvation . . . or will he save her and allow all of humanity to perish?

Praise For Conquer the Dark…

"A fantastically inventive reweaving of several intriguing belief systems seasoned with an urban flair in a new series featuring angels, demons and nephilim in their ongoing struggle. Ms. Banks demonstrates her flair for melding real events with paranormal explanations as she mixes in enlightening scenarios that feature enjoyable ethnic cuisine, breakdancing, the Main Library in Philadelphia and even the Delaware River in ways that pertain to the ongoing struggle between good and evil."

L.A. Banks was the author of the Vampire Huntress Legend series and the Crimson Moon Novels, including Left for Undead and Never Cry Werewolf. She had a bachelor’s degree from the University of Pennsylvania’s Wharton School of Business and a master’s in fine arts from Temple University. Banks considered herself a shape-shifter, writing romance, women’s fiction, crime and suspense, and of course, dark vampire huntress lore. She lived with her daughter in Philadelphia until her death in 2011.
Loading...
or
Not Currently Available for Direct Purchase