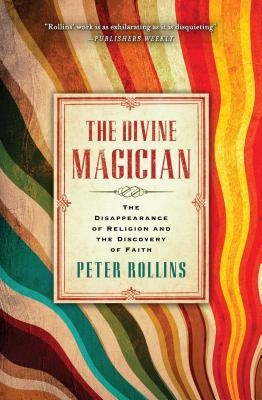 The Disappearance of Religion and the Discovery of Faith

In this mind-bending exploration of traditional Christianity, firebrand Peter Rollins turns the tables on conventional wisdom, offering a fresh perspective focused on a life filled with love.

Peter Rollins knows one magic trick—now, make sure you watch closely. It has three parts: the Pledge, the Turn, and the Prestige. In Divine Magician, each part comes into play as he explores a radical view of interacting with the world in love.

Rollins argues that the Christian event, reenacted in the Eucharist, is indeed a type of magic trick, one that is echoed in the great vanishing acts performed by magicians throughout the ages. In this trick, a divine object is presented to us (the Pledge), disappears (the Turn), and then returns (the Prestige). But just as the returned object in a classic vanishing act is not really the same object—but another that looks the same—so this book argues that the return of God is not simply the return of what was initially presented, but rather a radical way of interacting with the world. In an effort to unearth the power of Christianity, Rollins uses this framework to explain the mystery of faith that has been lost on the church. In the same vein as Rob Bell’s bestseller Love Wins, this book pushes the boundaries of theology, presenting a stirring vision at the forefront of re-imagined modern Christianity.

As a dynamic speaker as he is in writing, Rollins examines traditional religious notions from a revolutionary and refreshingly original perspective. At the heart of his message is a life lived through profound love. Just perhaps, says Rollins, the radical message found in Christianity might be one that the church can show allegiance to.

Praise For The Divine Magician: The Disappearance of Religion and the Discovery of Faith…

This book is unsettling, as intended, but anyone who wrestles with big theological questions in a post-secular world will find Rollins’ work as exhilarating as it is disquieting.
— Publishers Weekly,

Peter Rollins is a widely sought after writer, lecturer, storyteller, and public speaker. He is the founder of Ikon, a Belfast, Northern Ireland, faith group that has gained an international reputation for blending live music, visual imagery, soundscapes, theater, ritual, and reflection. He currently resides in Greenwich, Connecticut.
Loading...
or support indie stores by buying on