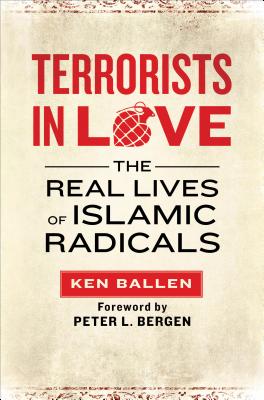 The Real Lives of Islamic Radicals

Drawing on unprecedented access, a leading terrorism expert profiles six terrorists to offer an astonishing new portrait of our enemies as we have never seen them before.

Imagine a world where a boy’s dreams dictate the behavior of warriors in battle; where a young couple’s only release from forbidden love is death; where religious extremism, blind hatred, and endemic corruption combine to form a lethal ideology that can hijack a man’s life forever. This is the world of Terrorists in Love.

A former federal prosecutor and congressional investigator, Ken Ballen spent five years as a pollster and a researcher with rare access—via local government officials, journalists, and clerics—interviewing more than a hundred Islamic radicals, asking them searching questions about their inner lives, deepest faith, and what it was that ultimately drove them to jihad. Intimate and enlightening, Terrorists in Love opens a fresh window into the realm of violent extremism as Ballen profiles six of these men—from Pakistan, Afghanistan, and Saudi Arabia—revealing a universe of militancy so strange that it seems suffused with magical realism.

Mystical dreams and visions, the demonic figure of the United States, intense sexual repression, crumbling family and tribal structures—the story that emerges here is both shocking and breathtakingly complex. Terrorists in Love introduces us to men like Ahmad Al-Shayea, an Al Qaeda suicide bomber who survives his attack only to become fiercely pro-American; Zeddy, who trains terrorists while being paid by America’s ally, the Pakistani Army; and Malik, Taliban leader Mullah Omar’s personal seer. Lifting the veil on the mysterious world of Muslim holy warriors, Ballen probes these men’s deepest secrets, revealing the motivations behind their deadly missions and delivering a startling new exploration of what drives them to violence and why there is yet an unexpected hope for peace. An extraordinarily gifted listener and storyteller, Ballen takes us where no one has dared to go—deep into the secret heart of Islamic fundamentalism, providing a glimpse at the lives, loves, frustrations, and methods of those whose mission it is to destroy us.

Praise For Terrorists in Love: The Real Lives of Islamic Radicals…

“The 9/11 Commission grappled with the question of what drove the 19 hijackers to their terrorist acts in 2001, but we did not have time to investigate and fully understand their motives. Ken Ballen’s exhaustive research, scores of interviews, and gripping writing make Terrorists in Love a uniquely valuable––and sometimes chilling––behind-the-scenes account of the extreme beliefs that often fuel the actions of jihadist militants.”—Lee H. Hamilton, former Congressman and Co-Chair of the 9/11 Commission

“Ken Ballen has managed the impossible for an American. He has worked his way into the intimate thoughts and frustrations and family conflicts that drove six young Muslims toward the jihadist movement, and he presents his findings in a series of compelling narratives.”—David K. Shipler, Pulitzer Prize-winning author of Arab and Jew and The Rights of the People: How Our Search for Safety Invades Our Liberties

“It’s simply astonishing how much Ken Ballen, an outsider, penetrated the closed world of Islamic radicals. In a fast moving, absorbing and at times shocking narrative, Ballen destroys stereotypes and defies conventional wisdom by allowing the ‘enemies’ to speak for themselves. America, meet the terrorists, really for the first time. And if you find yourself in the strange position of empathizing with them, don’t recoil in horror, for you might just have stumbled upon that unexpected insight that could help design a more effective response.”—Ammar Abdulhamid, former Islamic radical and leading pro-democracy activist in the Arab world

“Many authors write about terrorism. Ken Ballen took the rare step of talking directly to terrorists. If you want to understand them, read their stories, in their own words. By giving them voice, this book offers a rarely-seen glimpse into another world, the world of terrorists, not just terrorism.”—Philip Mudd, Former Deputy Director of the Counterrorism Center at the CIA, former Senior Intelligence Advisor for the FBI, and Senior Global Advisor, Oxford Analytica

“A valuable, even-handed and insightful window into the mindsets and emotions of jihadi terrorists. Ballen draws a telling portrait of the human side of terrorists, from childhood traumas to moments of transformation to radicalism and, in some cases, to renunciation of terrorists cause.  A compelling, if at times frightening study, one that should be read by anyone interested in the roots––and possible deterrents––of terrorism.”—Karen Greenberg, author of The Least Worst Place: Guantanamo’s First 100 Days

“Terrorists in Love shatters the dominant dispassionate treatment of modern day Islamic purveyors of death and destruction and instead offers a profoundly intimate portal into the fragile, emotional, even sexual factors that drive their behavior. Ballen blasts past the clichés about what animates terrorists and takes readers to places that no one has gone before. The profiles and revelations in this book are at times as uncomfortable as they are vital to appreciate what lies in the mind of some terrorists. I couldn’t put the book down.”—Steve Clemons, Washington Editor-at-Large, The Atlantic and Senior Fellow & Founder, American Strategy Program

“Deploying techniques developed during his two decades as a prosecutor and investigator, Ken Ballen interviewed more than a hundred Islamist terrorists in depth, evincing from them their inner stories. Here he profiles six of these men, and the results are eye-opening and full of startling implications.”—Daniel Pipes, founder and president of the Middle East Forum, and author of Militant Islam Reaches America

“Ballen not only gets beneath the skin of terrorists, but all the way into their hearts, revealing unimaginable emotional and personal secrets. He has shed surprising light on the never-ending question about militant jihadis––what are they thinking? Anyone who wants to know ought to read this unusual book.”—Jane Mayer, bestselling author of The Dark Side

“An unusual atlas of extremism — a riveting, behind-the-scenes look at the events that turned six young Muslims into terrorists.” —Washington Post

“[Ballen] adds nuance to a problem that Americans have tended to understand only in terms of good and evil …a much more human—though no less terrifying—picture of [those] committed to defeating the United States and Western civilization.” —The Boston Globe

“Illuminating, if harrowing, real-life love stories of Muslim extremists. From their sexual desires and liaisons to frustration with the backlash against these romantic fantasies, to mystical dreams and fiery verses summoning them to martyrdom, the book explores intimate sparks of Islamic fundamentalism…[A] must-read.” – The St. Louis Dispatch

“[A] disturbing, intimate look inside another world.” –The San Jose Mercury News

“[A] ground-breaking book . . . Ballen seeks to dispel our mislaid conceptions of terrorism in order to show the personal struggles and inner demons that inspire an individual to dedicate their life to the jihad…”–Urban Times

“An unprecedented and unusual look at Islamic radicalism.” – Publishers Weekly

“More than a captivating read…exposing first-hand personal accounts…within the terrorist movement [that] likely will hasten its demise."—Foreign Policy

“One of the most in-depth looks at individual terrorists' lives currently available . . . helps reverse some major misconceptions about the motives of these attackers. Ultimately, in Terrorists in Love, Ballen is bringing us closer to the real motives of terrorists, and thus closer to the truth. Even if that is uncomfortable, it's a step in the right direction.” –The Huffington Post

Kenneth Ballen is President and founder of Terror Free Tomorrow, a non-partisan, not-for-profit organization, which investigates the causes of extremism. Ballen has regularly contributed to CNN, and his articles have been published in The Washington Post, Financial Times, Los Angeles Times, Foreign Policy, Wall Street Journal, and the Christian Science Monitor, among others. Learn more at KenBallen.com.