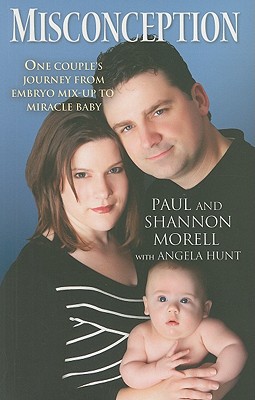 One Couple's Journey from Embryo Mix-Up to Miracle Baby

In February of 2009, Shannon and Paul Morell were especially eager to bring a new life into the world. After years of infertility and miscarriages they had, in 2006, finally scrimped and saved enough to have in vitro fertilization. The result? Two dear daughters had been born, and six precious embryos had been frozen.

They counted the days until they could transfer the six remaining embryos. Until the fateful day of February 17, 2009, when the clinic called. “The doctor would like to you to come in today…”

Shannon writes, “Face to face with the doctor, I noticed that his face was gravely serious. 'There's been a terrible incident in our lab,' he said. 'Your embryos have been thawed.'

A pause, as we both exchanged disbelieving looks, and he went on....

'Your embryos have been transferred into another woman.'"

The Morells have a story to tell. A cautionary tale of medical errors, unexpected miracles, sincere mourning, and grateful bonding with their son. Amazingly, theirs is also a story of joy-filled thanksgiving . . . a story of life—life that is precious, sacred, and treasured.

Paul and Shannon Morell have been married for eight years. Paul is an electrical engineer and small business owner. Shannon  holds a Masters degree in education and currently teaches eighth grade. They make their home in the Midwest, with their twin preschool daughters and their new son.

Angela Hunt is the bestselling author of more than 100 books, including The Tale of Three Trees, Don’t Bet Against Me, The Note, and The Nativity Story. Her nonfiction book Don’t Bet Against Me, written with Deanna Favre, spent several weeks on the New York Times bestseller list. Angela and her husband make their home in Florida with their dogs.
or support indie stores by buying on
Copyright © 2020 American Booksellers Association