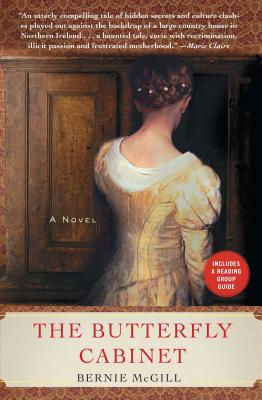 When former nanny Maddie McGlade receives a letter from the last of her charges, she realizes the time has come to unburden herself of a secret she has kept for more than seventy years: the truth behind the death of Charlotte Ormond, the four-year-old daughter of the wealthy household where Maddie was employed as a young woman. Based on chilling events that actually took place in the north of Ireland in 1892, The Butterfly Cabinet is a sterling example of dark, emotionally complex fiction.

Bernie McGill was born in Northern Ireland in 1967, the youngest of ten children. In 2008 her story “Sleepwalkers” won the Zoetrope: All-Story Short Fiction Contest. She has also written numerous works for print and radio. She lives with her family in Portstewart, Ireland, site of the real-life events which inspired her novel.

Praise For The Butterfly Cabinet: A Novel…

My novel [of the year] would probably be The Butterfly Cabinet by Bernie McGill, which is based, I think, on a true story, about the darkness inside all of us, and how politeness and education will not always prevent us hurting even those who need us most. McGill has the ability to enter into the brain and heart of her characters and so to make us sympathise with people who commit acts we abhor.
— Julian Fellowes, actor, novelist, and creator of Downton Abbey
or support indie stores by buying on
Copyright © 2020 American Booksellers Association