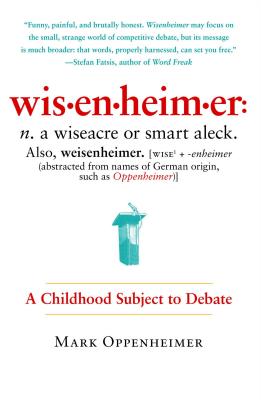 A Childhood Subject to Debate

HAVE YOU EVER MET A CHILD WHO TALKED LIKE AN ADULT?

Who knew big words and knew how to use them? Was he a charmer or an insufferable smart aleck—or maybe both? Mark Oppenheimer was just such a boy, his talent for language a curse as much as a blessing. Unlike math or music prodigies, he had no way to showcase his unique skill, except to speak like a miniature adult—a trick some found impressive but others found irritating. Frustrated and isolated, Oppenheimer used his powers for ill—he became a wisenheimer—pushing his peers and teachers away, acting out with prank phone calls, and worse. But when he got to high school, Oppenheimer discovered an outlet for his loquaciousness: the debate team.

This smart, funny memoir not only reveals a strange, compelling subculture, it offers a broader discussion of the splendor and power (including the healing power) of language and of the social and developmental hazards of being a gifted child. Oppenheimer’s journey from loneliness to fulfillment affords a fascinating inside look at the extraordinary subculture of world-class high-school debate and at the power of language to change one’s life.

Praise For Wisenheimer: A Childhood Subject to Debate…

“An intimate look at the high school team—no, not the football team—the debate team! You think only physical athletes make interesting subjects, try mental athletes. Who knew? In part a play by play look at the game. In part a story of one wisenheimer, and his transition from high school star, to starting all over as a lowly freshman at Yale. I was happy to follow him on his exceptional journey.”

“Every time Mark Oppenheimer won a high school debate tournament, he scored a point for all us wisenheimers. This witty book will strike a chord with all recovering smart-asses who recall their adolescent triumphs with a mixture of pride and mortification.”

—Anne Fadiman, author of At Large and At Small and The Spirit Catches You and You Fall Down

“Do not mess with Mark Oppenheimer or he will verbally dismember you. If you know what’s good for you, you’ll buy this funny book.”

“Here is the truth about blurbs on books: everyone hates asking for them, and no one enjoys the process—though they are honored by the request—of giving them. This whole asinine tradition should be put to rest, but probably won’t, because asinine things are forever, while good things, like the old Yankee stadium, are destroyed. Anyway, Mark Oppenheimer is a great guy and a super writer, and you should read his book, even if you should ignore this blurb.”

"Mark Oppenheimer’s journey from loquacious preschooler to smart-ass grade-schooler to champion high-schooler is funny, painful, and brutally honest. Wisenheimer may focus on the small, strange world of competitive debate, but its message is much broader: that words, properly harnessed, can set you free."

—Stefan Fatsis, author of Word Freak and A Few Seconds of Panic

Mark Oppenheimer is a regular writer for The New York Times Magazine, Slate, The New York Times Book Review, The Boston Globe, and The Forward. His journalism has also appeared in The Wall Street Journal, Harper’s, Details, and Travel + Leisure, and his essays have appeared in The Believer, The American Scholar, and Yale Review. He is the author of two books, a founding editor of The New Haven Review, and an occasional commentator on NPR's All Things Considered and Day to Day. In the school year 2008-2009, Oppenheimer was a lecturer in the English and Political Science departments of Yale University and a visiting professor of creative writing at Wellesley College. He has also taught at Wesleyan and Stanford. He holds a doctorate in religious studies from Yale and is currently the coordinator of the Yale Journalism Initiative. With his wife, daughters, dog, and two cats, he lives in the Westville neighborhood of New Haven, Connecticut.
Loading...
or support indie stores by buying on