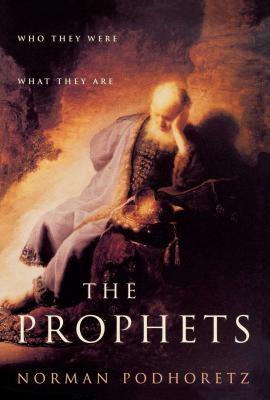 Who They Were, What They Are

A radical reinterpretation of the biblical prophets by one of America's most provocative critics reveals the eternal beauty of their language and the enduring resonance of their message. Long before Norman Podhoretz became one of the intellectual leaders of American neoconservatism, he was a student of Hebrew literature and a passionate reader of the prophets of the Old Testament. Returning to them after fifty years, he has produced something remarkable: an entirely new perspective on some of the world's best-known works. Or, rather, three new perspectives. The first is a fascinating account of the golden age of biblical prophecy, from the eighth to the fifth century B.C.E., and its roots in earlier ages of the ancient Israelite saga. Thus, like large parts of the Bible itself, The Prophets is a history of the Near East from the point of view of a single nation, covering not only what is known about the prophets themselves -- including Elijah, Amos, Isaiah, Jeremiah, and Ezekiel -- but also the stories of King David, King Saul, and how the ancient Israelites were affected by the great Near Eastern empires that surrounded them. Layered into this work of history is a piece of extraordinary literary criticism. Podhoretz's very close reading of the verse and imagery used by the biblical prophets restores them to the top reaches of the poetic pantheon, for these books contain, unequivocally, some of the greatest poetry ever written. The historical chronicle and the literary criticism will transport readers to a time that is both exotic and familiar and, like any fine work of history or literature, will evoke a distinct and original world. But the third perspective of The Prophets is that of moral philosophy, and it serves to bring the prophets' message into the twenty-first century. For to Norman Podhoretz, the real relevance of the prophets today is more than the excitement of their history or the beauty of their poetry: it is their message. Podhoretz sees, in the words of the biblical prophets, a war being waged, a war against the sin of revering anything made by the hands of man -- in short, idolatry. In their relentless battle against idolatry, Podhoretz finds the prophets' most meaningful and enduring message: a stern warning against the all-consuming worship of self that is at least as relevant in the twenty-first century as it was three thousand years ago. The Prophets will earn the respect of biblical scholars and the fascinated attention of general readers; its observations will be equally valued by believers and nonbelievers, by anyone with spiritual yearnings. Learned, provocative, and beautifully written, The Prophets is a deeply felt, deeply satisfying work that is at once history, literary criticism, and moral philosophy -- a tour de force.

Norman Podhoretz, the author of eight previous books on subjects ranging from contemporary literature to foreign policy, was editor in chief of Commentary for thirty-five years and is now the magazine's editor at large and a senior fellow at the Hudson Institute. A graduate of Columbia and Cambridge Universities, as well as of the Seminary College of Jewish Studies (where he earned a Bachelor of Hebrew Literature), he has been awarded a Pulitzer Scholarship, a Kellett Fellowship, a Fulbright Fellowship, the Francis L. Boyer Award from the American Enterprise Institute, and five honorary doctorates, including one from the Jewish Theological Seminary and another from Yeshiva University. He lives in New York City with his wife, the writer Midge Decter
Loading...
or support indie stores by buying on